The Los Angeles Kings officially clinched their playoff spot on the weekend, as they are getting hot at the right time, it would seem.  They have moved 4 points clear of the Anaheim Ducks in the Pacific Division standings and that is thanks, in large part, to their number one goalie, Jonathan Quick, who was hot, hot, hot... in Week Twenty-Four.

In three games last week, Quick posted a 3-0-0 record with 1 shutout, the only player in the pool this week to pick up 8 points, the clear winner of the nod.  This is his first nod of the year and his first nod since the 2012 season, back when Brenda had him on his team then too.

Quick posted a shutout against the Blackhawks on Monday and wins against the visiting Rangers on Thursday and Bruins on Saturday.  That's a very good week, considering any Stanley Cup hopes this season would likely have to go through two of these three teams in the Spring.

In the overall numbers, Quick's 8 points has now lifted his overall rank to 4th, now with 37 wins and 84 points, only 8 points off the overall lead, held by Patrick Kane of the Blackhawks.

As for the pool, Brenda & Seward, all of a sudden, have a pretty good bargain pick in the 1st round, since they took the Los Angeles keeper with the 12th overall pick.  He isn't the best pick in the round, bargain-wise, but to improve upon their draft ranking is a very good return.

A new name to the Mover & Shaker list in the 2016 season, as Mike's team finally woke up from its season-long slumber and dazzled the standings, from Monday to Sunday, picking up 33 points and doing what it should have been from day one, if you were to ask Mike (I assume).  His team has been cursed with much bad luck this year, spending the better portion of the season in the bottom-third, but at least there is one bright spot to his season. 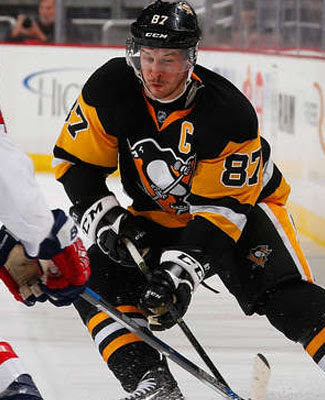 Mike's team was led by Sidney Crosby of the Penguins, who finished the week with 7 points, as his hot streak continues.  Crosby is now up to 7th overall in pool scoring, still below of his 2nd overall pick in the draft this year, but from where he was coming from in the rankings, his season has recovered well.

Also having good weeks were Joe Colborne of the Flames and Joonas Donskoi of the Sharks, finishing up with 5 points a piece.  Three more players finished with 3 points each, while three more had a pair of points and then one single rounded out his scoring for the week, leading the way at 33 points.

At the end of Week Seventeen, Mike's team was stewing in injury, finishing in 25th spot, a good place for the Week Eighteen Waiver Draft and since then, his team has improved, step-by-step, up to 20th place in the standings, moving up from 22nd the week before.

His team has still be wrought with injuries, now without Dennis Wideman for the rest of the season and seemingly no return timetable given for Benoit Pouliot, so he's making due with what he's got and that's okay.

Historically, this is Mike's 4th Mover & Shaker nod all-time, having three mentions in the 2014 season, when he finished 10th overall in the standings.

Despite having some horrible, horrible luck in the injury department this season, Week Twenty-Four saw Troy drop into the Basement Dweller position for the first time.

Troy's team was ranked 24th in skater games played with 30 and 24th in goalie minutes played with 2 starts, but only managed 9 points total in the week, which was a very poor scoring rate, across the board.  With the poor week, his team dropped from 18th to 21st, but thankfully, his team is 34 points clear from the bottom and only has three weeks left in the year.

Out of the 9 points his team picked up, Joseph Blandisi of the Devils, Gustav Nyquist of the Red Wings and Sergei Bobrovsky of the Blue Jackets each had 2 points, making up 6 points of his total.  Three of his players were knocked out of the weekly lineup to major injury and then there was another key injury suffered in the week, which also set his team back badly.

Troy's team is certainly better than this, especially since Washington's Nicklas Backstrom is on it, yet was a surprising zero last week.  Unless the unforeseen happens this week, his team should be able to stay away from these mentions for the last few weeks.

Up at the top of the standings, Jeremy's team found a couple more points in between themselves and Brenda & Seward's team, as the lead now stretches to 6 points.  These two teams are left to battle it out for their name on the trophy and the big pay day at the end of the year.

In 3rd place, Brian's team solidified their spot, increasing their lead by a couple points on John P.'s team, which now sits at 5 points.  Neil is now 10 points back, Scott is 13 points back, while Kristy & Don are still hanging on at 19 points back.  It's an even greater long shot that Ryan still stays in the race at 26 points back, but all his team needs is one huge week.

Two races at the end of the year should make for some good pool watching in these last three weeks.

The injuries finally caught up to Wes, while Derek & Dan's goon team had the week that they have been paid for in Week Twenty-Four, as we've had a changing of the guard this week.

There is no doubt that the injuries that Wes' team has suffered has done him in, because they have been many and major, as it were, so his goons were not able to perform this week, only sitting in the bin for a total of 6 minutes.  The pool's third duo had a little bit more good fortune, as their team found new and exciting ways to make it to the box this week.

Now entering Week Twenty-Five, Derek & Dan have all the momentum and they'll be tough to stop.

If it is really necessary to talk about, which it really isn't, Ryan's rookies had another 10 points in Week Twenty-Four, increasing their lead significantly and really setting the bar high for rookie scoring, ever, in this pool.  His team now sits at 144 points from his freshmen and I'm surprised I'm still writing this portion of the Newsletter.

This may not show up again until the year-end.  Just a heads up.

The busiest week of the NHL season did not drum up any more points in the hockey pool this week, as 52 NHL games only spawned 584 points among our 27-team hockey pool, an average of 11.2 points per game.  Our top scoring week this season was 679 points in Week Nineteen, done with 50 NHL games, and with all the players now going down for the remainder of the season, I fear that we'll not see those numbers in the last three weeks of the season, despite them also being fairly busy.

Skater participation has been declining slowly, while goalie minutes have been up and down in the last month to six weeks.  The pool just isn't covering the gamut as much anymore, it would appear.

As for penalties, the pool isn't doing too badly there, still collecting about 10 minutes per game, 10.2 PIM, to be exact.  It isn't the 12.3 PIM we saw in Week Nineteen, as that last Waiver Draft really gave the pool a kick in the ass.

Still, our teams are going to have to do more with less, it would seem.  The top two teams will have to fight it out amongst themselves, while 3rd place will be a race for four or five teams, depending on what next week brings.

Technically, it is an undisclosed reason, as to why Alexander Wennberg was held out of the Columbus lineup on Sunday for the Blue Jackets, so for now, he'll be listed as a healthy scratch.  He's day-to-day for right now, but that's all we can say at the moment.

Scott has had some real good success with Wennberg since the Week Eighteen Waiver Draft, having 13 points since activation.  He has certainly helped the jump up in the standings, moving from 9th to 6th, since these players became live.