Alright, now that the Newsletter is published, I think we can finally get to the Waiver Draft, which I know a lot of you have been waiting impatiently for, but it's all a real process and it's got to get done... so be impatient, just a little while longer!  Until your pick finally comes around, have a peek at the Newsletter, it will keep you all caught up.

What a crazy week for scoring leaders, as there were four or five players in the league that could have taken the Player of the Week nod at any other time in the season, except when Patrik Laine posts an 11-point week and dominates the scoring title for Week Eight.

The Finnish goal-scoring sensation did just that... and only that... score goals.  Laine scored 11 goals in Week Eight, didn't register an assist, which would have given him quite the edge in a tie-breaking situation, if there was going to be one this week.  There wasn't however and he earned the nod on the points alone.

For Scott, this might have been somewhat of a disappointment, as Laine carried his team out of last place and out from the opening pick in the Waiver Draft, he'll just have to settle for the pick after that, all thanks to Laine.  Laine doubled his point output this season in the week and climbed up to 46th overall in pool scoring, but Scott's luck hasn't been so great, because he took him with the 8th overall selection.

Even with Laine's production, Scott's team wasn't even all that close to the Mover & Shaker nod for the week, but that wasn't to say that the race wasn't good.  It certainly was.  Two teams eclipsed the 40-point mark in the week and in the end, Grant's team was best, posting 43 points, just short of the season-high for the year and his team moved up to 4th place from 10th in the process. 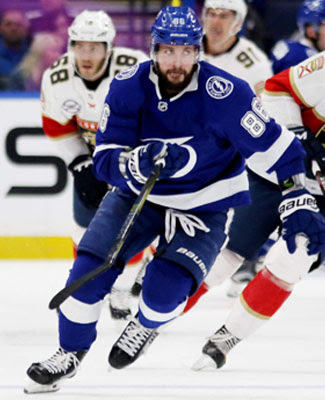 Grant's team, well, the healthy ones, at least, were on fire in Week Eight and they were led by Nikita Kucherov of the Lightning, who finished the week with 9 points, one of the definite candidates for Player of the Week, if it was any other week, surely.  Jack Eichel of the Sabres finished with 6 points, Ryan McDonagh of the Lightning finished with 5 points and Keith Yandle of the Panthers and Garret Sparks of the Maple Leafs both posted 4 points as well.

This is already Grant's third Mover & Shaker nod this season and his team is only in 4th place, which means that when his team isn't red hot, it's ice cold or close enough to it without earning a Basement Dweller nod at the same time.

Grant's team has three key injuries on it, two of which will likely be addressed this week and it's crazy to think that if Grant's team was 100% healthy, it would probably be sitting in a money position right now.  But his team is one of a few that shied away from taking goalies too early and went on the scoring trail instead and it has certainly worked out for his side.  Now, he's got the chance to move out some players and really improve upon his side.

I know I've said it in years previous, but earning the Basement Dweller in the week where the Waiver Draft order is decided isn't the worst thing in the hockey pool, but when you go back-to-back weeks with the Basement Dweller, you know things aren't going your way.  Sorry, Eric... it's just the way it is, I guess.

15 points just wasn't going to get it done in Week Eight and Eric's team was alone in the basement when the final buzzer went on Sunday night, going back-to-back and dropping down from 17th to 21st.  Sure, his Waiver Draft pick improved by four spots, but back-to-back weeks means that his team has really fallen off the pace for the overall money.

Sidney Crosby of the Penguins accounted for one-third of his point total in the week, finishing with 5 points, but eight players on his side didn't register a point, two of which were due to injury and one of his goalies has lost the confidence of his coaches and didn't even get to dress in a back-to-back situation.

So, at the first player swap, Eric's team sits 61 points out of 1st place, which may not be impossible to close the gap, especially with a Crosby on your team and maybe when Patrice Bergeron gets healthy again, but what else could he play for?  He's had no rookies, his team is doing okay at game-winners, but still goal-less in the shootout... so game-winners, perhaps?

The top three has gone unchanged for a second week in a row, as Troy continues to lead, Stuart sits in 2nd place, but 13 points back, and Stacey M. remains in 3rd place, also 13 points back, but 11 goals behind Stuart in the tie-breaker.

Grant's team is still healthy and in the race, 4 points behind 2nd and 3rd place, Kristy & Don are 5 points behind Grant after dropping off a bit, Mike had a good week and climbed into 6th, 14 points out of the money and Clayton's team couldn't keep up the Mover & Shaker pace, dropping back down to 7th, tied with John P., 15 points out of the money.

The rookies were getting after it in Week Eight, posting 26 points, close to a season-high, but not quite there as a whole.  John P. led the way in the week, thanks to Andrei Svechnikov in Carolina and Casey Mittlestadt in Buffalo, giving him 5 total points in the mini-game and closing the gap to Clayton's team, if only so slightly.

Clayton's rookies posted 3 points and still holds a 13-point advantage, heading into the Waiver Draft, where teams are going to likely start poaching some of the good young talent out there, trying to earn their money back, one way or the other.

The pool posted 34 game-winning goals as a collective in Week Eight, the second-best total we've seen this season in a week.  Of course, the goal-scoring wrecking crew that belonged to Scott in the week, led the way with 4 winners, giving his team a total of 10 this season, tied for 8th overall in the mini-game, only 4 goals back of the leader, Stuart, who finished the week at 14.

Devin Shore of the Stars is the top player available in the category, he's already had 3 game-winners this season and could be considered the most clutch player available.  Of course, just because he has the lead now, doesn't mean he's going to keep it up through the year... or does it?

How about the skills competition... how did the hockey pool do there this week?  Poorly.  I think there was only one shootout this week and it only generated 2 goals in the hockey pool, 3 goals were scored in that competition, but there were 14 shooters, if that makes any difference.  Mike and Jesse were the two teams that picked up a shootout goal for the mini-game and Mike got a share of the overall lead with Jeremy, now with 5 goals in the shootout this season.

The pool has collected 39 of 51 total goals scored in the shootout this season, but no player available has more than 1 goal and Markus Granlund of the Canucks is the only one on the list with more than one attempt... he's got a couple shots.  This mini-game may not be supplemented well in the Waiver Draft.

What about the goons?  I'm sure most are wishing that the PIM pool was going to pay, it is a little more fun and it's very Waiver Draft friendly.  No dice... the wheel had other ideas this year.

Clayton's team was the goon team of the week, thanks to Evander Kane's tantrum on Saturday night, his team finished with 36 minutes in the week to take top spot, but that wasn't enough to get up into the top five this week.  Stuart's team continues to lead overall, 173 minutes in penalties and his team is in the money as well.

Another week in the books, another elimination in the survivor pool, as Mike's team could not hang on to a win this week, Cam Talbot failing to get the job done in Los Angeles on Sunday night and his team is no longer in the race for the zero dollars at the end of the tunnel.

Wes, Jeremy, Troy and Stacey M. are all still in the running and it's no coincidence that two of those teams are in the money race as well.

Plus/minus doesn't mean anything either this year, but it is a fun stat to watch.  Our Mover & Shaker, Grant, saw his team post a collective +19 rating to lead the way in the week, but his up and down season has only given him a +17 rating overall, which ranks 8th in the hockey pool.  Neil's team was a combined -6 in Week Eight, but still has the lead with a +34 rating this season.

The goaltending situation in the pool is a sad state of affairs, as we saw a new season-low in average minutes played in NHL games this year, down to 85 minutes collected per game.  There are a lot of goalie injuries this season, something that can be rectified this week, but it won't be active until next week.

It was the busiest week of the season, so far, at 54 games, which means the pool collected the most points this week, 689 in total, which was good for the whole, it did mean that the average number of points pulled from NHL games was up, just in time for the Waiver Draft.

Only one note to speak of from Sunday night and it was Edmonton defenseman Matt Benning taking another seat as a healthy scratch, this time against the Kings. Benning only has 5 points in 18 games this season, thought to be ready for a breakout year, but the trips to the press box suggest otherwise.

Clayton's defense is tied for 10th in the pool in scoring with 38 points, but he was expecting a lot more out of Benning and it just hasn't come yet.  Could he be ripe for a drop this week?  We shall see.
Posted by opiatedsherpa at 10:42 AM