No ties to be broken this week, in all three of the mentions on the Newsletter this week, so that makes things pretty easy and straight-forward.  Cam Atkinson of the Blue Jackets was the week's top player, the only one to hit the 8-point mark in Week Seven, paving a clear path to top spot.

This brings up Atkinson's total to 12 goals and 20 points in 19 games with the Jackets this season, good enough for 41st overall in hockey pool scoring.  After a little bit of a slow start to the season, Atkinson and the Jackets are really starting to find their stride.

The Jackets forward was also quite the catalyst on Clayton's team this week, as you'll see in the next section, but this is Clayton's first Player of the Week nod since the 2016 season and his 14th overall.  Believe it or not, this is only the second time a Blue Jackets player has ever earned the Player of the Week nod in the hockey pool and it was Atkinson who did it, also back in the 2016 season.

The Mover & Shaker race was a bit of a runaway for Clayton's team in Week Seven, as his team finished with a new season-high in weekly scoring, with 44 points, and that was 13 points better than the next closest teams in the race, belonging to Stacey M. and Mike at 31 points a piece.  After shaking out all of those points, Clayton's team moved up from 13th to 4th in the standings and only trails Stacey's team by 4 points for 3rd place. 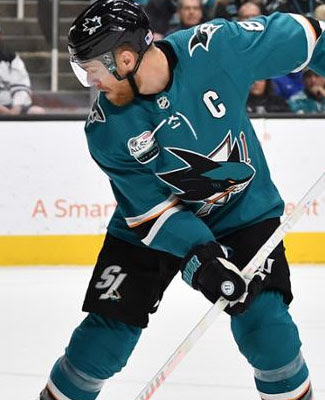 Cam Atkinson was Clayton's top player, finishing with the Player of the Week nod at 8 points, while Joe Pavelski of the Sharks and Ben Bishop of the Stars each had 6 points, Erik Karlsson of the Sharks finished with 5 points and Mike Hoffman of the Panthers had 4 points in the week.  Two players on his team failed to pick up points, one was in the minors and one is on a cold streak, which included a healthy scratch, so it was a well-rounded effort from just about everyone this week.

Clayton's team led the pool in goals scored in the week, also setting a new weekly scoring mark for this season at 17 goals, picked up 3 wins from his goalies and had a combined plus/minus rating of +13 in the week, so you know they were playing at both ends of the ice too.

Historically, Clayton ties Allan S. for the most Mover & Shaker nods now in the history of the hockey pool with 17 all-time, but it has been a few years since Allan was in the hockey pool, having moved on some time ago.  44 points is far from being the best week in the pool all-time though, that record was set by Allan back in 2012 with 53 points, a mark that Tony came close to matching last season with 52 in Week Twenty-Four.  Still though, a very good week.

Heading into Sunday's action, there were three teams vying for the Basement Dweller at 14 points, doing their best not to pick up as many points as possible and leading the way by the end of the night, Eric had picked up no more points and his total of 14 stood as the week's lowest total and he has earned his third Basement Dweller nod of his hockey pool career.

The return of James Van Riemsdyk to the Philadelphia Flyers lineup this week was his saving grace and he would have seen his team in dire straits, if the power forward didn't come back, registering 3 points in the week to lead the way for his team.  Six players failed to register at least a point on his side, including both of his goalies and injuries certainly played a part in the absence of scoring, one player on the IR and a couple of his other big guns unable to play in at least one game this week.

The tough week for Eric's side means that his team dropped from 11th to 17th in the standings and his team now sits 16 points out of the top 10.  His team is going to need some positive news on the injury front right away, if he is going to see his team keep the pace, but dropping down in these weeks does greatly improve your pick in the Waiver Draft, which will get started a week from today.

There was no immediate shift in the top three teams between the end of Week Six and the end of Week Seven, as Troy, Stuart and Stacey M. remained as our top three, in that order.  Troy's lead had shrunk to 1 point and Stacey is only 2 points behind, keeping things very close for the time being.

Clayton and Kristy & Don are tied at 181 points, only 6 points behind Troy for top spot and as we saw this week, hot weeks do happen, so that can certainly change in a big hurry.

It wasn't a heavy scoring week for the pool's freshmen in Week Seven, as Clayton and Derek B. led the way in scoring in the week with only 3 points each.  Clayton's lead in this mini-game remains fairly safe, his team at 29 points, compared to John P. and Ryan's teams at 14 points.  With the Waiver Draft fast approaching, decisions are definitely going to need making and these mini-games are a big part of it.

There were a good number of shootouts in Week Seven and there was one that went seven rounds and 14 shooters, but the actual number of goals were still held down to a minimal number.  Overall, the pool saw 7 tallies in the skills competition and Jeremy's team was able to snag a couple of those goals, boosting his team into the lead in this mini-game, now sitting at 5 tallies this season.

Jeremy's team is 5-for-6 in the shootout this season, Evgeny Kuznetsov of the Capitals is 2-for-2, leading the way for his side.

The hockey pool collected 30 game-winners in Week Seven, which isn't bad for a 48-game schedule in the week.  Six teams each picked up 3 game-winners and they are Wilton, Stacey M., Clayton, Steve, Mike and Ryan.

John P. and Tony both lead the way in the overall race, they each have 12 winners, while Kristy & Don and Stuart both have 11 winners on their teams.  Four more teams are at 10, so this race is long from over and there are some good candidates for clutch goals available in the Waiver Draft as well.  Head on over to the Available Players page, it has been updated today too.

Brad Marchand of the Bruins was at it again in Week Seven and he vaulted Stuart's team right up to the pinnacle of the PIM pool standings again, thanks to a 43-minute week, a new season-high for minutes this season.

Stuart's team now sits at 149 minutes in penalties at the end of the week, a major and a minor better than Stacey C.'s team, which didn't really flex its muscles too much in the week, but has been consistent in their trips to the box this year.

A big chunk of the remaining teams in the survivor game has been eliminated in Week Seven, as the week started with eight teams and we're now down to five after Dale C., Chelsea and Eric were all eliminated from contention.

This leaves Wes, Jeremy, Troy, Mike and Stacey M. to battle it out for the survivor game title.  With five teams remaining, I've added them to the standings page, just so you can keep up.

Participation, both from the skaters and the goalies, continues to slide down, thanks to injuries and other good stuff, which means points are getting harder and harder to come by.  The pool dropped to a season low 11.96 points per NHL game for an average scoring rate, sinking much further than the previous low of 12.69.  The Waiver Draft can't get here soon enough for most, I'm sure, some of these players we have on our teams just have to go and go soon!

The Anaheim Ducks are continuing to take a pretty good beating on the injury front these days, especially on the blueline. Hampus Lindholm can now be added to that list, as he was added to the Injured Reserve on Sunday, thanks to a lower-body injury.  There was no exact timetable for his return, but he'll miss at least a week with the injury and likely be reevaluated closer to the date.  Also, John Gibson was a scratch from Sunday night's game against the Avalanche, as he was under the weather and couldn't make the start.  He's day-to-day and will probably be ready to go for the team's next game, Wednesday night, home to Vancouver.

Lindholm's injury means missed skater games for Stuart's 2nd place team, while Kristy & Don missed out on a start for their 5th place team last night.  Those are some clutch money spots missing out on some action, trying to keep the pool close.

The dream preseason for Ty Rattie has turned out to be a bit of a mirage for the coming season, as the winger has not been able to find the same scoring touch as he had when the games didn't count and that cost him another trip up to the press box on Sunday night, missing out on the game against the Golden Knights.  Rattie has 2 goals and 4 points in 10 games this season, a definite departure from his September hot streak.

If it was more like an injury problem, than Brenda & Seward could probably use this to perform a huge overhaul on their team at the Waiver Draft, as the bonus rounds do allow for extra moves to be made, if injuries are prevalent.  The duo are last in the pool in skater games played, by a fair margin, so the only direction they can go is up, starting in Week Ten.

One note sort of glossed over in the week was the placement of Patrick Maroon on the Injured Reserve by the Blues on Friday.  Maroon is dealing with an upper-body injury and had to cut his attendance on the team's current road trip short, as he went back home for better treatment and/or diagnosis.  There's still no word on his timetable for a return, but his placement was on Friday, likely retroactive to the game on Wednesday last week, which means he will be eligible to return on Wednesday, if he's healthy enough.

The rugged forward has also been quite the disappointment this season, having only 7 assists in 14 games, which isn't doing Scott's team any good this year.  Scott's team has been struggling all year, sitting in 25th and 10 points behind Brenda & Seward to try and escape last place, so this is a likely candidate for a drop.
Posted by opiatedsherpa at 10:08 AM