The rebuilding process for the Sabres could be a bit of a long one, if the look of the team right now is giving any indication.

The team has some talent waiting in the wings, but it just doesn't look like "the guys" that are going to get the job done and lift this team into the playoffs any time soon.  I think in saying that, some of the usual suspects for the pool might suffer a little, in terms of scoring, and that will be the approach that I will be taking with them this year.

I think you can take some of the usual suspects, but make sure you don't pick them too early, leaving more points on the board than what you're going to get out of Buffalo.  Thomas Vanek and Ryan Miller being the two big names that come to mind the fastest. 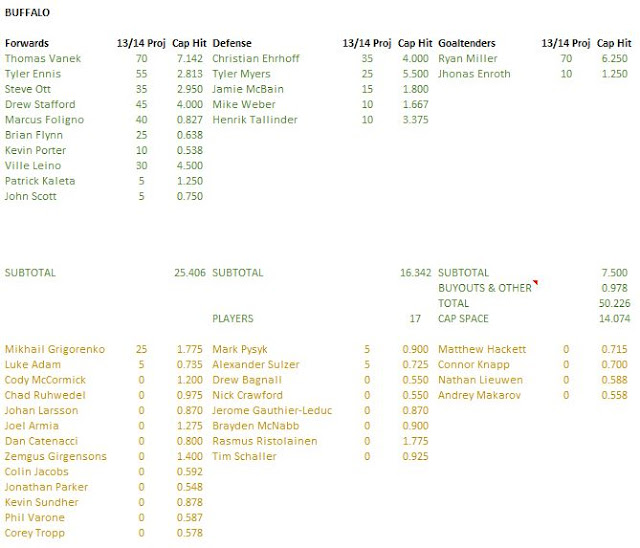 There are a few good forwards that you'd want to take a look at, like Vanek, Tyler Ennis, Drew Stafford and the up-and-coming Marcus Foligno.  These guys will likely make for pretty good picks this season, while Steve Ott will be a good depth pick.

There is a bit of a sleeper pick in Ville Leino, who might sneak out of the basement of the Sabres scoring pile and he could pick up some worthy points, but with the depth the Sabres have, it is hard to say who he is going to play and whether or not he'll have that motivation to put up points.

I only have Christian Ehrhoff and Tyler Myers to eclipse the 20-point mark for the Sabres, which doesn't exactly provide them with a lot of scoring depth from the back.  I think this is another one of those contributing factors to the lack of success I am prognosticating for the Sabres.  Even in their crop of young defensemen, they don't exactly have anyone that is going to beat down the door and create a scene.

I expect Myers to bounce back from a couple of rough seasons and find some more reasonable form, but it really gets thin after him.

There is no question that Ryan Miller can steal games and he will do so for the Sabres in 2014, but his numbers are going to be limited as well and the trade rumours will likely fire up before too long, which didn't help the American keeper much last year.  The team will have to give him a vote of confidence right away or else this long season will be even longer.

If there is a possible breakout player, I would look to the rookie, Mikhail Grigorenko, who had a taste of the NHL last year.  I don't have him pegged for many points right now, but that could change with a positive camp.

None to speak of.

One huge name left on the restricted free agent market... Cody Hodgson.  Hodgson did well in his first full (if you could call it that) year with the Sabres, picking up 34 points in 48 games, albeit a streaky 34 points.  Hodgson could fit right in and give the team some scoring depth, but free agency will do the team's head in, for sure.
Posted by opiatedsherpa at 6:45 AM