The Senators were such an interesting story in the shortened 2013 season, as they had dealt with so much injury and still willed their way into the playoffs and even made a bit of a push with some semi-healthy superstars back in their line-up.

Looking back into 2013 to get an idea for 2014, I begin to wonder how much will they have left in the tank, since they will be trying to make a playoff push without their long-time captain, Daniel Alfredsson, among some other changes heading into this year.

Actually, I think the Senators have done a good job in finding pieces to supplant their losses in leadership, both within the organization and with trades.  Sure, they had to give up some talent to get some talent, but nowadays, it is more about winning now than anything else.

The real trick will be keeping all this talent happy and healthy and then I think the Senators have a real shot at a playoff spot in the new Atlantic Division.  I think they have enough firepower up front, one of the best young defensemen in a solid core group of blueliners and they have a couple of good goaltenders that can carry the load. 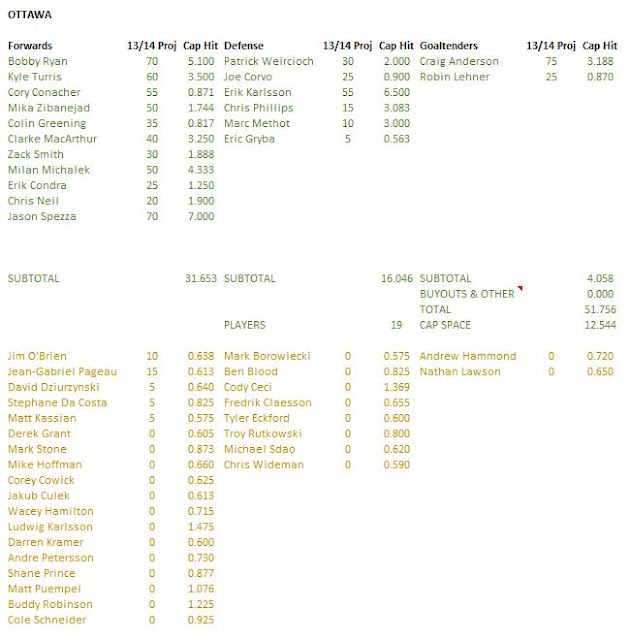 You could argue that the injuries hit the Senators forwards the hardest, when you look at both Jason Spezza and Milan Michalek, down near the bottom of the ranks of the forwards, due to their 2013 scoring.  Both players are very talented, but they are prone to their fair share of injuries, so they are a bit of a gamble to take.  I think both players can exceed the projections that I have set out for them, Spezza can do much more than that, but these are the points where I would feel comfortable taking them.

The biggest addition to the forward ranks in this off-season was Bobby Ryan from the Ducks and he will bring some immediate quality to the goal scoring of this team, with the upside of around 35-40 goals in the year.  There are likely a lot of people licking their chops, wondering what the Spezza-Ryan connection is going to look like this season.

Let's not forget, the Senators also have quite a bit of depth up front.  Kyle Turris, Cory Conacher, Mika Zibanejad, Clarke MacArthur and Colin Greening should all be able to provide ample scoring depth through the year and with the big guns taking a lot of that attention away from them, they could do some real damage this year.

The other side of the injury argument for the Senators is that they could have taken the biggest hit when Erik Karlsson suffered the Achilles injury and he was gone for most of the year.  The year previous' Norris Trophy winner was expected to do big things in the shortened season, but that season was cut even shorter by injury.  He was able to come back at about 70% last season and to that, he was fairly effective.  Nevertheless, he will be healthy coming into camp and it will be interesting to see how he bounces back.  I have a conservative projection on him right now, but projections are made to be adjusted.

The Ottawa blueline might not be as deep offensively as the forwards, but that's okay, in the team sense.  Sure, Patrick Weircioch and Joe Corvo should do enough to be pool defensemen, but they will likely be that in a back end sort of way.  I wouldn't look for too much out of them, unless something drastic happens and they have to take on more minutes in key roles.

If you haven't picked up on the pattern by now, I would begin to wonder if you're ever going to get it.  You give Craig Anderson minutes in the crease and that guy will get you some points.  Over the last five seasons, he has been able to average over 1.1 points per 60 minutes played and three out of those five seasons, he has been over 1.3 points per 60 minutes.  In the 2013 season, he finished at 1.27, which is still pretty good.  As long as he remains in the Senators net, he will manage points.

With a kid like Robin Lehner in behind Anderson, the Senators would be wise to use him well, giving their ace netminder a rest from time to time.  In doing so, Lehner should get enough points to become somewhat relevant in the pool and he would be good enough to take the reins, should anything drastic fall upon their number one.

There are a couple spots open among the forwards, by my estimation, which could allow for Mark Stone and/or Jean-Gabriel Pageau to really jump up and impress this season.  On defense, we might get to see Cody Ceci have a chance this year, which would be good for the club.  I think these guys may be ripe for the picking around waiver draft time.

Spezza has been working out in the off-season, coming off his serious knee injury, which is now surgically repaired.  Sounds like he should be good to go for camp.

One big RFA left on the ledger for the Senators, as Jared Cowen still remains without a deal, although there are reports that there is a big deal on the table for him.  Cowen has lots of potential to be a top end defender in the league, but the 22-year old has yet to really produce in the regular season.  Everyone seems to know it's coming, including the Senators, but this situation is seemingly dragging out, which doesn't feel like a good thing for club and player.
Posted by opiatedsherpa at 2:30 AM