The new-look Dallas Stars will have a few new looks to show off, as they will have new duds with a new logo (see right), some new faces to debut this season and they'll play in a realigned Central Division.

With all of these changes (except for maybe the logo and jersey), there will be a little bit of adjusting that the Stars will need to do, but if they can assert themselves in the early stages of the season, they could dictate their own fate a little bit more.  Kind of like that old adage about what do to during your first few days in prison.

There should be plenty of excitement surrounding the team, as they will spend less time in the Pacific time zone and they will also be one of four teams new to this division, with Colorado, Minnesota and Winnipeg.  If they can skate with determination and speed, they should be able to do just fine in the new Central. 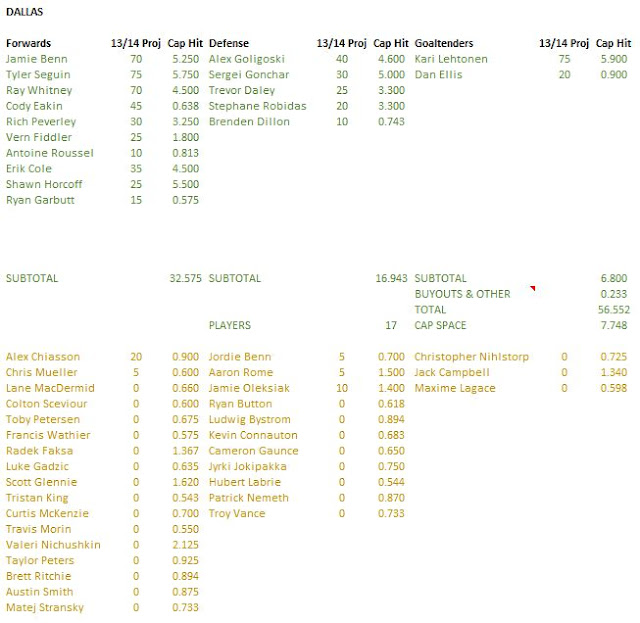 From a balance standpoint, I think what Dallas did different between the 2013 and the upcoming 2014 season is quite noticeable and I think using the horrible look in 2013 helped some decisions and taught some lessons for 2014.  There isn't quite as much aged star power on the forward lines, as Ray Whitney remains, but he still should be very useful.

In are Tyler Seguin from the Bruins, Cody Eakin has a full-time job with the Stars and Rich Peverley, also in from Boston, should provide some mid-range veteran support up front as well.  The retirement home that was the Stars last season, doesn't look quite the same at all, does it?

The real key will be Jamie Benn, who will be the team's top goal scorer, now with a healthy year behind him and no contract issues to start the year, we might finally see what he's finally capable of, now with enough NHL experience to his name.  Can Seguin be the lynch pin that sets Benn apart from the rest?

Right away, you notice that there looks to be four worthy defensemen, including the aged Sergei Gonchar, who gave us all the impression that he was heading back to Russia in the off-season, but the Stars decided to throw enough money at him to stay for another couple of years.  I'm not entirely sure that this was a smart move, but since the team has Alex Goligoski working at a good clip, Gonchar could prove to be a good insurance policy down the road.

Trevor Daley and Stephane Robidas are going to be good, solid guys to keep your blueline going.  I wouldn't expect a lot from these two, but if they can be steady, they certainly won't lose your pool for you.

There is just something about Kari Lehtonen that really restricts me from projecting him too high and I think it has a lot to do with his injury prone status, which he gained in his hey-day in Atlanta.  Lehtonen, for as good of a goalie he is, he does come with a fair bit of risk.  If I could draft Lehtonen at a spot where 75 points is a good pick, he would become a pretty good bargain pick, assuming he has a healthy year.  He will play and he will play a lot.  The Stars have a real good shot this year, assuming Lehtonen stays healthy.

With spots open in the forward ranks, there is some room for a young player or two to break through and make a name for himself.  Names that come to mind, Alex Chaisson and 2013 1st rounder, Valeri Nichushkin would be good candidates for this.  IF you can wait through training camp, do hear what the scouts and reporters are having to say about these two, because I think they could compliment your pool team, if they're ready.

All good and all set for training camp.

Everyone is signed and accounted for.
Posted by opiatedsherpa at 5:15 AM