Could this be the last kick of the can for this San Jose Sharks core?

Joe Thornton, Patrick Marleau and Dan Boyle are set to be unrestricted free agents at the end of the season and with little playoff success between the three of them, could their shelf life with the Sharks be coming to an end?

The Sharks have been pretty good for a while now, but only pretty good.  Not good enough to take home major hardware over the past five or so years.  So what will this do to the core and the rest of the team?  I might think that contract years might be good news for the Sharks and the poolies after their core.  There is no better motivation, it would seem in the NHL, than the promise of a contract extension. 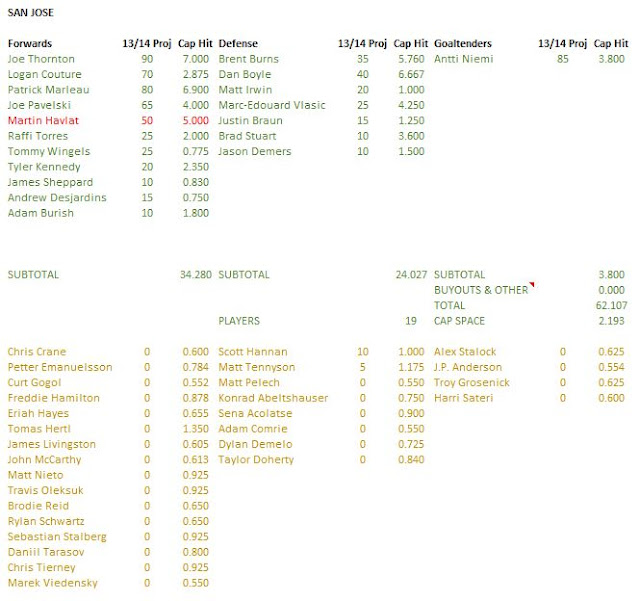 Well, I am going to accuse both Thornton and Marleau of holding out for their new deals right away and I believe they will come up with big years.  Looking at the rest of the team, their playoff success (or lack their of) will likely stem from the lack of depth that the Sharks are showing up front and the two leaders will likely try with all their might, only to fall a little short.

Both Logan Couture and Joe Pavelski are signed on for years to come and will likely represent San Jose, as the team's future after this season.  Both players are capable of doing great things on the puck and scoring some timely goals.

The only other name on the list for the Sharks this year would be Martin Havlat, who hasn't quite fit in with San Jose as much as I thought he might have, when he was dealt from the Wild for Dany Heatley.  Havlat has been okay, but he hasn't exactly revived his career with the Sharks, nor has he really helped the team reach the next level.

On defense, the aging Dan Boyle has slowly been dropping off his production over the years and at age 37, how much more could he possibly have in the tank?  I think Boyle will be somewhat of an effective defenseman, but he won't be what he once was and I don't think a contract year will help him as much as his free agent-to-be counterparts.

Brent Burns has been a part of some discussions that he might move up to the forward ranks this year, but until that's really set in stone, I will still rank him as a defenseman and project his points as so.  He'll be okay, but I don't think he is ready to lead the team from the back just yet.

Don't forget about Marc-Edouard Vlasic... he'll continue to be a good depth defenseman for us poolies.

The starting goalie is a lock for the Sharks.  Antti Niemi finished 3rd in pool scoring last year among all players, something that might be hard to top for the Finnish netminder, but I think he'll put up enough of an effort to come close.  I have him ranked pretty well, just like he has played over the past few years.

I am not going to sugar coat this.  The San Jose Sharks really lack depth and that lack of depth goes so far as to say, there is very little (to just about nothing) coming up the ranks, ready to breakout.  On paper right now, I can't give a name, but maybe someone at camp will get the attention of everyone and poise to break out.

Keep an eye on Martin Havlat.  In July, he underwent pelvic surgery and his start in camp and possibly the regular season are still up in the air.  There has been no real update since July, but those updates were filled with panic.

Restricted free agent defenseman Nick Petrecki, who has played only one game for the San Jose Sharks, is still unsigned, but I imagine he won't be too far away from signing a new deal.
Posted by opiatedsherpa at 1:30 AM