What was it about those 2013 Toronto Maple Leafs that shot them up the Eastern Conference standings from a playoff-less streak that seemed to last forever to a team that finished 5th and nearly upset the Boston Bruins in the opening round of the playoffs?

The designs of Leafs management came together and proved that a playoff team could be built again in the centre of the universe.  Phil Kessel, the expensive golden boy, came through with both scoring and leadership, James Reimer gained back some confidence and started winning some games down the stretch, Nazem Kadri escaped from under the thumb of Ron Wilson and showed he could be that player under Randy Carlyle and Cody Franson became the defender he was pegged to be, back when he was drafted by Nashville.

It seems like a lot to duplicate, especially since two of the players are still unsigned and the team brought in a new goalie to fight for (and likely win) the starting job in net.  The Maple Leafs have a way of making their seasons interesting, but finally, I think it is interesting in a way that will keep the fans content... for now. 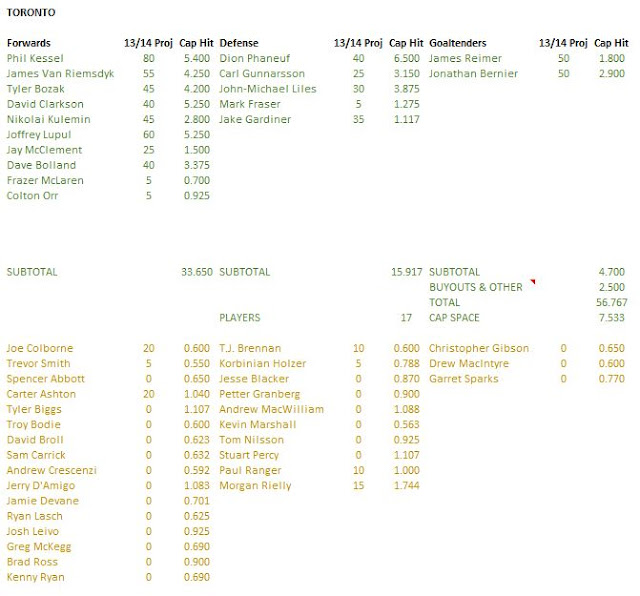 A couple of point-per-game seasons in Toronto is slowly making me into a believer that Phil Kessel is now a worthy contender for a 1st round pick in the hockey pool draft.  It has taken a little longer than what management likely thought it would, but now that Kessel has cut through the nonsense of the Toronto media and established himself as a legitimate star, he is now in business.

The real gamble in Toronto is how many games is Joffrey Lupul going to play this year?  He missed the better part of the 2013 season, only playing 16 of 48 games and hasn't played a full season since 2007, but he sure has chemistry with Kessel and that's hard to deny.  If he can play 60 games this year, he is still a reasonable pick-up for the pool, remarkably.

The depth beyond the top two doesn't look too bad, as I figure James Van Riemsdyk is now finding his footing in Toronto and should be able to pick up a few more points this year, while Tyler Bozak will hover around his best year, Nikolai Kulemin might take a bit of a hit this year, while new faces David Clarkson and Dave Bolland will add both grit and a few extra points this year, which Toronto will need in the Atlantic Division.

The polarizing character that is Dion Phaneuf will generate either feelings of love or hate towards the guy, but for the most part, he also generates points, despite how you feel about him.  Phaneuf will get minutes in Toronto and as the captain, that should be expected, so I think the points won't be too far behind.  This is also the last season of his large contract, so his impending free agency might make him a little more motivated this season.

In behind Phaneuf, as it stands today, the re-emergence of Jake Gardiner is going to help the Leafs in the long haul, as he has put up some impressive numbers in his short NHL career.  I expect him to grow a little more as an NHL'er and be a lot more of that reliable pool-scoring blueliner.

The Leafs also have some depth here, as both John-Michael Liles (injury-prone status considered) and Carl Gunnarsson may figure in well into some pool designs as well.

The large over-hanging question mark in Toronto is in the crease.  James Reimer finished the 2013 season strong and even had a pretty good playoff appearance, but the Leafs ended up winning the Jonathan Bernier sweepstakes out of Los Angeles... so who do you have?

Both goalies are 25 years old, Reimer has seen more NHL experience over the last three seasons, but Bernier is believed to have the starting goalie pedigree.  The Leafs are not the only team to be deep in a goaltending question, but this will really heat up before too long and it will be a question of how they manage it.  Can they possibly platoon the position well, like Anaheim or Chicago last season.  Riding the hot hand may be the order of the day.

The Leafs have some spots open, by my estimation, which can allow for some youth to come up and break out.  Joe Colborne and Carter Ashton have been waiting in the wings for the Leafs, gaining some confidence in the minors and maturing phyiscally, so that could be a bonus.  If some free agency issues on the blueline cannot be resolved before too long, look for a kid like Morgan Rielly to make a move and turn some heads.

Two big names still on the list as unsigned restricted free agents for the Leafs.  Forward Nazem Kadri and defenseman Cody Franson are still awaiting new deals and they are both coming off of good years to warrant some good deals (according to the market).  With only a couple weeks until training camp, there will be a big push to get these two signed, but with only so much money left in the coffers and so many spots left to be taken, it will be a tight fit, if a fit at all.
Posted by opiatedsherpa at 12:45 AM