The St. Louis Blues are progressing well as an organization.  They have been drafting well, developing those young players at a reasonable speed and signing good depth and veterans to help move things along.

The Blues finished 4th in the West, getting home-ice in the first round of the playoffs, but came up short against the Los Angeles Kings in that opening round.

It has been a pretty good off-season for the Blues, as they added a couple of pieces, shifted some pieces around via trade and had a good showing at the draft.  The Blues are poised to make some more waves in the 2014 season, especially with the divisional realignment.  I don't think the playoffs will be a problem for the Blues, it will be a question about how far they could possibly go.

Once they sort out one more contract, I think this team has what it takes to be a real contender in 2014. 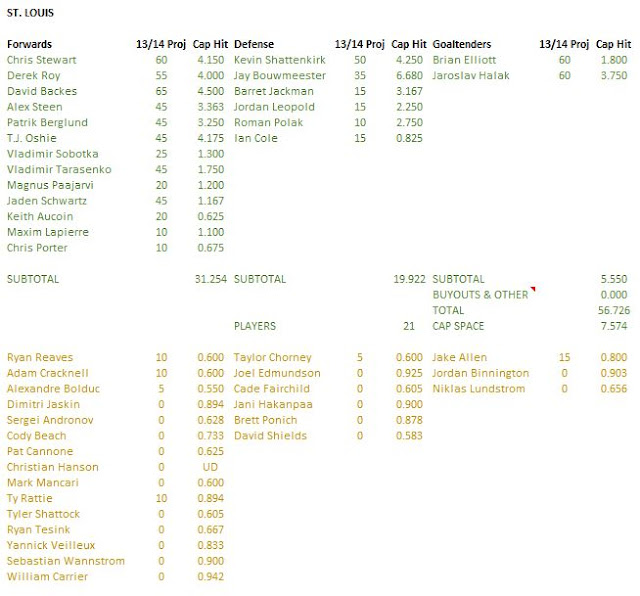 Probably one of the more important aspects about the Blues' forward group is that there is no one specific target for teams to defend against, as there isn't a star that is over and above everyone else and the committee does a good job of scoring timely goals.

I am looking at David Backes and Chris Stewart to lead the way for St. Louis this year, as they really picked up their games last season.  I don't think their totals will get them into the first couple rounds of the draft, but they will be clutch players this year.

I think we'll see some pretty even distribution of scoring through the depth, as newcomer Derek Roy, Alex Steen, Patrik Berglund and T.J. Oshie will give the team all kinds of options through the line-up.

The Blues have done an exceptional job piecing together a quality, puck-moving defense corps at this level  Right now, it looks like Kevin Shattenkirk will lead the way for St. Louis on the blueline, followed closely by a few seasoned vets in Jay Bouwmeester, Barret Jackman and Jordan Leopold.  There is a good combination of puck moving and defensive responsibility among this crew and they have the potential to get even better with one more signing (see below).

The Blues goaltending is a tough situation for us poolies.  A couple of seasons ago, it was a dead heat between Brian Elliott and Jaroslav Halak and then last season it was Elliott, who took more minutes in the end.  I don't think this goaltending duel is over quite yet and it could be a battle for minutes again this season.  The hot hand will rule the roost and in goaltending, that could go either way very quickly.  Both goalies will be good for points, but they will be shared for the most part.

A couple of second-year players, who didn't necessarily have exceptional rookie seasons in Vladimir Tarasenko and Jaden Schwartz, could be in for some good years, as they join the ranks of a talented group of scoring forwards.  It could be more of an either/or case, but they'll be in the mix for sure this year.

Looking happy and healthy to start the year.

There is one glaring omission from the current roster and that is young defenseman Alex Pietrangelo.  Pietrangelo finished off his entry-level deal last year and he is looking for a good pay day from the Blues, a team with some deep pockets, in terms of cap space remaining.  He was the team's top scoring defenseman, so there's a chance he'll be looking to be paid like one.

Also unsigned at the moment, but of lesser importance... forwards Evgeni Grachev and Phillip McRae.
Posted by opiatedsherpa at 1:15 AM