The Red Wings are the second of two teams in the projection list (the first being Columbus) moving to the Eastern Conference this year and unlike their Western Conference moving buddy, I think the Wings have the offense to really make a splash in their new digs.

The Red Wings will be moving into the aptly-named Atlantic Division, with all three teams from Canada, the two Florida teams, Boston and Buffalo.  Throwing the Wings into this mix just looks like a whole lot of scoring and quite a bit of winning, right off the hop.  Of course, the Bruins are going to be a tough match-up, but they won't be unlike playing the Chicago's or St. Louis' of the old Central Division.

I am expecting some big things from the big guns out of Detroit and I would be prepared to take some of them rather high. 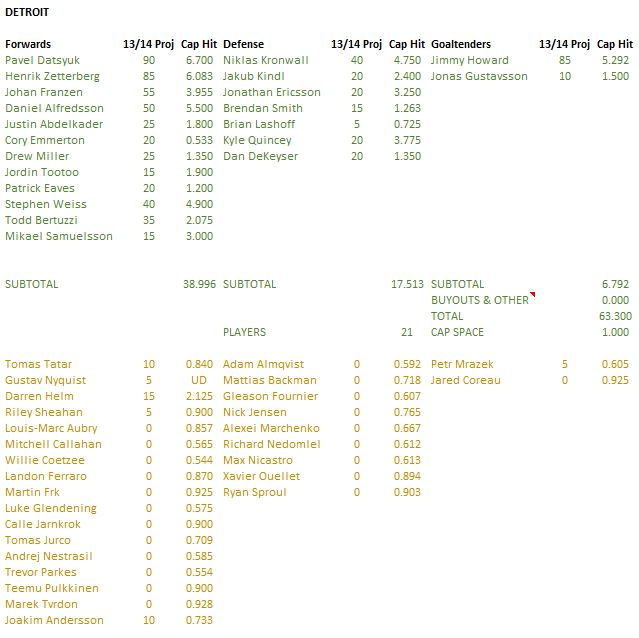 The Red Wings, annually, are a hot bed for their top end forwards and I don't see why this year would be much different.  The Wings are going to be one of those teams to look out for this year and if you don't have Pavel Datsyuk or Henrik Zetterberg high on your list, you may be missing out.

Now, beyond the top two, there is a bit of a gap below, since the Red Wings are full of players who have all kinds of question marks related to them.  Most of those question marks are health-related, so there is an element of caution when picking forwards who are not Datsyuk or Zetterberg.  There's no question that Johan Franzen, Stephen Weiss or Todd Bertuzzi have been able to pot points before, but they have all been rocked by injuries in the past, which discounts their projections on an annual basis.

There will also be a whole lot of excitement surrounding Daniel Alfredsson and his arrival in the Motor City, as he will be hungry to win a Cup with the Wings, in what could a retirement parade through the league.  One last kick at the can.  Alfie can put scoring streaks together still and he will have an interesting compliment of players to try to in Detroit, so he will be an interesting pick-up this year.

Long gone are the days where Nicklas Lidstrom was a lock to be picked in the draft at a point in time which could be deemed too-early and then Brian Rafalski wouldn't be too far behind.  Yes, those days are gone and now everyone is left to pick Niklas Kronwall and he doesn't get everyone going as much as Lidstrom did, so he's left to be picked at a more reasonable position.  Kronwall should be a more-than-solid pick for a blueliner this year, especially since someone is going to have to pick up points this year.

The other interesting pick here is Dan Dekeyser, who showed that he could skate with the big boys near the end of the regular season, so it will be interesting to see what kind of role he gets with the big club this year.  I know he'll go in my draft, but I don't think he should go too early... yet.

Well, if the Red Wings are going to win games like I think they might, Jimmy Howard is going to be a can't miss pick this year.  I have a feeling that he might go really high in a lot of drafts and that isn't a bad thing.  If you can get a guy like Jimmy Howard past the 10th pick, you might be in for a real treat this year.

If Stephen Weiss is healthy this year, I think there is a real chance that we might see the player that we were always meant to see, but never did during his stay in Florida.  Weiss was supposed to be a top end playmaker upon his arrival in the NHL, but his career never really took off the way it should have.  Healthy year, good coaching, exceptional linemates... the math is adding up for Weiss.

There is still some mild concern over the health of speedy forward Darren Helm, as he has been dealing with some back problems, stemming back to last season.  The latest update that I had seen suggests that he should be ready for training camp, but it might be something to keep an eye on, especially if you think he has some sleeper potential.

Gustav Nyquist was the last RFA to sign with the club on August 20th.
Posted by opiatedsherpa at 5:00 AM