The Phoenix Coyotes have a lot to be thankful for.  A new owner (finally!), some stability in the desert and some good management that has built them a team that will hopefully draw a crowd, now that they're going to be sticking around for a while.

Yes, it will take winning some games for the crowds to appear in Glendale, but since the Coyotes have been using the old Buffalo Sabres model for success: hard-working, plucky skaters in front of a world-class goalie, they have been able to be relevant in the playoffs.

Sure, they didn't make the playoffs in 2013, but they were certainly in the race.  With the division realignment, I think the Coyotes will have a shot at the 2014 playoffs, as I can see them cracking a wild card spot in the West.

With a few new faces, the Coyotes may be a little bit more popular among the poolies, than they normally are, which isn't saying much.  Phoenix hasn't been a very popular place to take players from in the last few years. 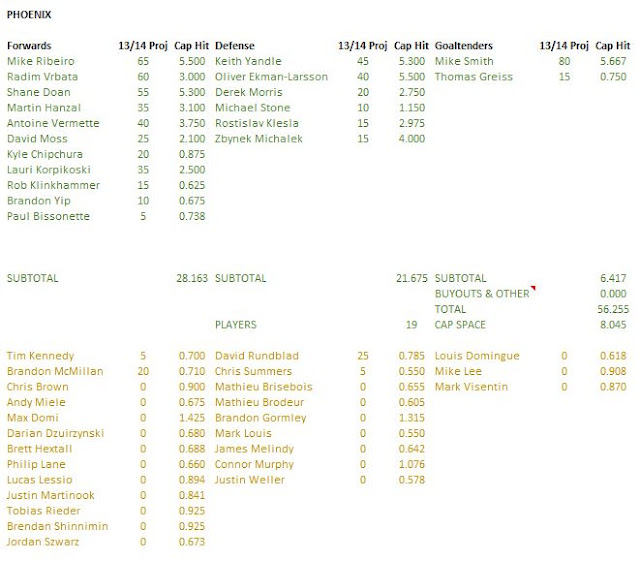 The biggest pick-up in the off-season for the Coyotes was centre Mike Ribeiro, who was left on the free agent market after a quick stop in Washington last season.  Ribeiro, for the first time in his career, averaged a point per game with the Capitals, but he played with some naturally-gifted forwards in Washington.  I think we're going to dial those numbers back a bit in Phoenix, as it isn't the same situation, but he should still be able to generate some offense.

Radim Vrbata and Shane Doan will keep that veteran flavour in the line-up and they should be able to make good in this scoring by committee offense.  These two have done well for the Coyotes in the past and last year, they stuck together in the team's scoring race, so as long as they both stay healthy, they should be viable options again this year.

If you're looking for durability in your line-up, look no further than Antoine Vermette, who hasn't missed a game since the 2009 season.  I think with another full season, he could be in the 40-point range for the Coyotes, especially if he can find some help from the team's youth.

Phoenix has a couple defensemen worth picking up this year, who are locks for the team.  Keith Yandle and Oliver Ekman-Larsson are consistent picks now in the draft and it seems that every year, they go earlier and earlier.  I think they will be among the top defensemen this year and for good reason.  Both can skate really well and make clean, crisp passes out of their own zone.  Both players are definitely good options.

With an invite to the Team Canada Olympic orientation camp, Mike Smith is poised to become a focal point for a lot of people this year.  Smith's big frame and athletic ability has turned him into a very good goalie and if his goal is to start with the Maple Leaf on his chest, then he will be highly motivated to have a great season.  Now, if he does go and play in Sochi, a post-Olympic letdown should also be expected.

There looks like there should be one breakout player this year for the Coyotes and if David Rundblad can find a regular spot on the blueline, the 2009 draft pick should finally be coming into the right age range to make a name for himself.  Keep an eye out for him through camp.

Coyotes should have the all-clear right now.

After a career-year, scoring pace-wise, Danish forward Mikkel Boedker still remains unsigned for the 2014 season.  Boedker finished with 26 points in 48 games for the desert dogs last season and is likely looking for a bit of a pay raise.  The Coyotes have some cap space left for him, no question, but one of the key attributes of the Coyotes is that they rarely mis-manage their budget.  Could be a tough run for Boedker.
Posted by opiatedsherpa at 2:00 AM