The Vancouver Canucks are in a strange period of transition coming into the 2014 season, as the team answered a few questions, but instead of calming the nerves of those asking, they have just opened the door for more questions.  Yes, goaltending being the root of all the questions.

Thankfully, the questions about the goaltending situation can be answered when play resumes in October, as it will be Roberto Luongo in net for the Canucks, instead of Cory Schneider, to whom everyone thought would be the number one guy this season.  Nevertheless, Luongo appeared at the Team Canada Olympic orientation camp in August, so the faith that he is still a number one goalie is still rampant in the hockey community, even at the highest international level.

The Canucks will also have to prove that they are a team that has their Stanley Cup window open, as the core of the team will get another shot at the playoffs, trying to wade through a much competitive division, the Pacific, which could work to make them a better team or prove that they may need a little bit more work to solidify their line-up.  Only time will tell. 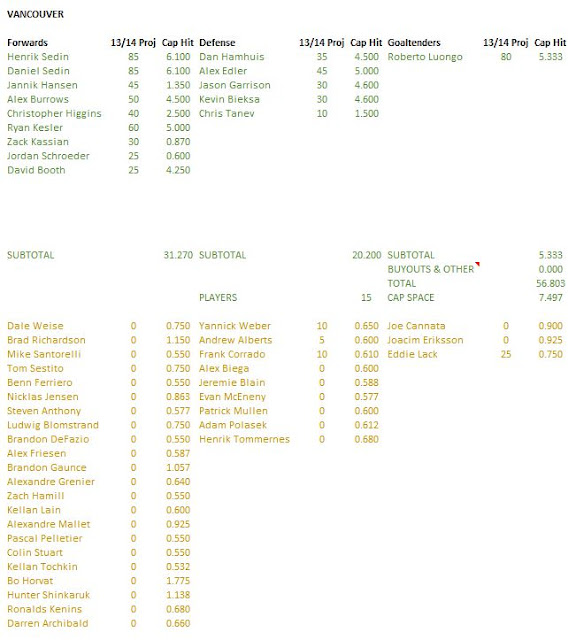 The last couple of seasons haven't quite been like the Art Ross Trophy winning years for Henrik and Daniel Sedin in Vancouver, especially the lockout shortened season, but it hasn't been like their offense has dried up completely.  The twins hovered around a point-per-game or slightly below all year long last season, like they couldn't quite find the groove.  With injuries and uncertainty throughout the line-up last year, it was tough to find some regular magic with a new linemate each night.

Everything is pointing to Ryan Kesler being ready to start training camp and be ready for the regular season.  Kesler had a rough 2013 season, playing in only 17 games, thanks to multiple injuries, but if he is coming in ready and healthy, he should be able to hit some regular scoring targets this year.

Under the new system of John Tortorella, it will be interesting to see what kind of role that Alex Burrows has, whether or not he finds more time with the twins or Kesler.  Without knowing full well what he is going to be up to or if he shares duties between the two spots, I am not keen on projecting him too high.  Other depth like Jannik Hansen and Chris Higgins are also going to be in the same boat, so scoring depth may be a concern for Vancouver.

The blueline for Vancouver is a source of pride, because of its depth, but it should have just as many questions about its playoff ability as the goaltending.  Nevertheless, Alex Edler should be ready to bounce back from an off year in 2013.  Edler tends to be more of a defenseman who gets his points when the forwards are scoring, not quite the guy setting it all up.

A full 82-game season, hopefully one that is healthy, will help a guy like Kevin Bieksa return to form as well, but that seems to be difficult for him over the past couple seasons.  His projection will reflect that, but I would say he could raise those numbers up, if he proves to have a healthy year.

Dan Hamhuis and Jason Garrison should also be pool-worthy blueliners this year and they could very well come in at some reasonable scoring levels, not just your fill-in guys near the end of the draft.  The Canucks could have a good year, if their blueline does the trick.

A lot of questions that always surrounded Roberto Luongo were stemmed from the playoffs and his regular seasons have not been criticized quite as badly.  When Luongo gets back to playing some regular minutes, his numbers should see some normalcy, as the split last season with Schneider took his numbers down a touch.

There is lots of potential to find a breakout player in Vancouver, as they have some roster spots open, in my estimation.  A flashy winger like Nicklas Jensen should get a reasonable look, while new draft picks like Bo Horvat and Hunter Shinkaruk might get an extended look to help fill in some gaps.  On the blueline, keep an eye on Frank Corrado, who has been turning some heads through his junior career.

There are some lingering questions about David Booth and the strength of his ankle, which he injured and suffered setbacks on last season.  A July update said that he would be close to ready for training camp, but anything short of "he'll be ready to go," is somewhat concerning.  Keep an eye on him.

Everyone who isn't in Europe playing is under contract.
Posted by opiatedsherpa at 12:30 AM