The trade-off for the Winnipeg Jets this season will be far-less travel in their divisional realignment, but competition will be harder to play against as a whole.  How will this affect a team that was on the verge of making the playoffs in the Eastern Conference.

The Jets will be situated in a division with the Blackhawks, Blues, Wild, Avalanche, Predators and Stars, which cries out some tough defenses to play against.  The Jets were not exactly your most freeflowing offenses to watch in the former Southeast Division, but to make the top three in the division or be a wild card in the West is going to be difficult.

There are things to like about Winnipeg, like some of the players that will give the team a good push, but questions about team chemistry and special teams are abound.  There is some talent coming up the ranks, which should compliment the players already there, but there just seems to be a lack of "that guy" who can give some credibility to the whole line-up. 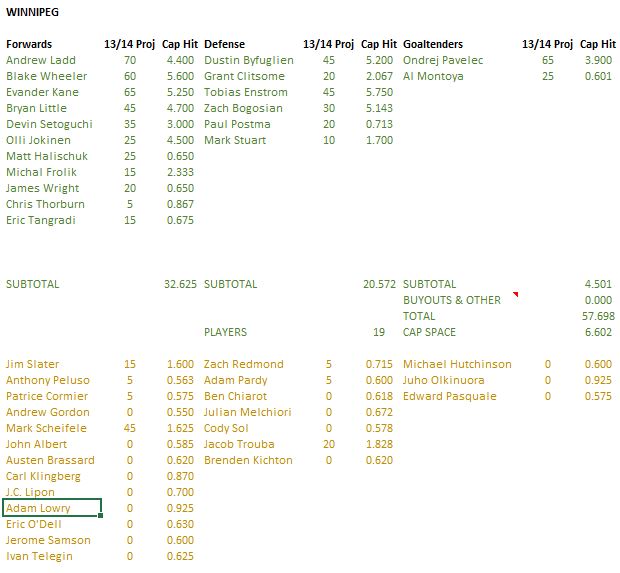 The Jets have some scoring forwards on their side and they will find their way to the net, no question.  What I am questioning would be the frequency, importance of those goals and whether or not they'll lead to more points in the standings.

Andrew Ladd has really taken to the lead role of the Jets forwards group, scoring at a reasonable pace since joining the Thrashers after the Blackhawks' 1st Cup fire sale.  Ladd has been invaluable to the team and continues to find his way to the net, which I expect him to do again this year,  but I feel like they don't have a player that truly compliments his skill set... yet.

Evander Kane and Blake Wheeler are growing into their game well and I think they will grab some headlines this year as key forwards   Between Ladd, Kane & Wheeler last season, they accounted for nearly 60 goals for Winnipeg last season and I don't think doubling that amount, because of the longer schedule, will be quite enough, but it will be fun to watch.

Depth comes up a little bit short, as it looks like only Bryan Little and Devin Setoguchi will be worthy of a pool selection, as per my projections.  Little has been good for Winnipeg, when healthy, while Setoguchi hasn't been able to revive any sort of killer instinct he had in 2009, when he scored 31 goals.

The Jets do have an impressive wealth on the blueline, with a top pairing like Dustin Byfuglien and Tobias Enstrom, both Olympic hopefuls for their countries.  Both players can exceed their 45-point projections, but with the tighter checking in the West, they may not want to take as many risks offensively, which may cost them points in their own pocket, but should save their goalie from red light burns on his neck.

Zach Bogosian, Grant Clitsome and even Paul Postma have some pool upside this year, especially Bogosian, who will hopefully get a full year in.  It will be interesting to see how the pairings actually fall together and whether or not the Jets get a little bit more responsibility on the blueline to make up for some of this offensive flavour.

In goal, Ondrej Pavelec always keeps it interesting in the Winnipeg net.  Some nights, he could be the best goalie you've ever seen and then there are those nights where he can't be yanked out of there fast enough.  On the plus side, the ratio of good nights to bad nights are going in the right direction, but he could turn into a confidence killer for his team, if he's not careful.

The Jets did pick up some quality goaltending for their back-up, as Al Montoya is quietly becoming a very good back-up, still looking for his shot to be a starter somewhere.  If Pavelec has a tough time this year, Montoya could get a real shot.

The Jets have some real potential for breakout players, both of the rookie persuasion.  Forward Mark Scheifele was so close to making the roster in the shortened season and it should be his time to make that leap and excel while doing it.  On the blueline, if Jacob Trouba can make the team out of camp, he has a chance to be a pool-worthy defenseman, but he'll need quite the camp to push through a coaching staff that is extra-patient with their youth.

The only injury on the books at the end of the season was Olli Jokinen's ankle problem and that should've been taken care of before they got too far into golf season.  Assume he's good to go for training camp.

One defenseman, Arturs Kulda, still remaining unsigned as a restricted free agent.  Did not play for the Jets last season, likely not being rushed into a new deal.  Certainly not a pool prospect for us.
Posted by opiatedsherpa at 12:00 AM