The Montreal Canadiens and their hype machine always seem to promise that they'll get bigger and tougher in each off-season, but they never really do.  Is that just me thinking that or do they come across that way to other people too?

The Habs have lacked size for way too long now and with their main pick-up in the off-season, Daniel Briere, now in the fold, they haven't really made the effort to get much bigger, have they?  Sure, Montreal added George Parros, but when you add a guy who is only going to play 2 to 5 minutes a game, that doesn't make your team any bigger.  Size in the penalty box serving fighting majors doesn't count.

On defense, the recent add of Douglas Murray may give them some more size, but like Hal Gill of previous incarnations of the team, he couldn't quite do it all by himself.

No, the Canadiens will have to rely heavily on their speed, hands and Carey Price once again and this formula continues to bore the rest of us.  I am beginning to wonder. 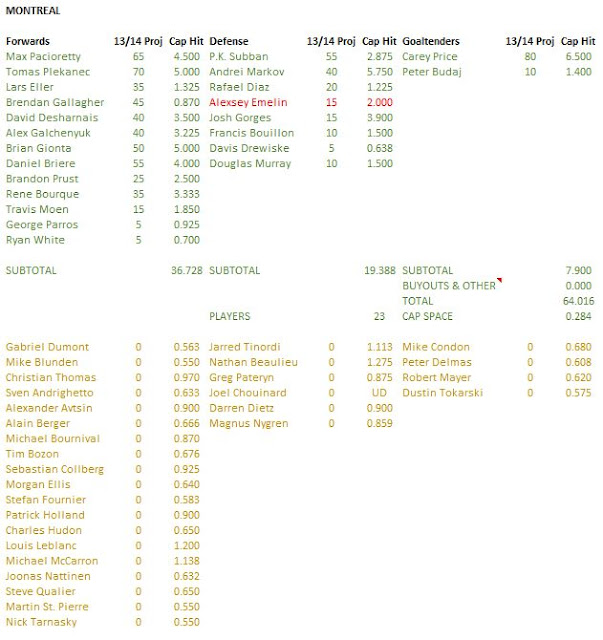 Regardless of their size, the Canadiens are going to score some goals and their forwards are going to be reasonable solutions for roster players on your pool team.  Max Pacioretty and Tomas Plekanec will lead the way again this year for Montreal, as they wait for their youth to catch up this year.

It will be interesting to see how Briere moving home works for his production, but moving to a small team, already as a small player, doesn't seem to mix well in my projecting of his season.  The Habs will get hit and Briere will get hit a lot, which makes me think he'll be hard-pressed for big numbers this year.

I think Brian Gionta is due for a bounce back season, which could see him hover around the 50-point plateau and give the team some reason to believe in their captain again.

Beware the sophomore jinx for Brendan Gallagher and Alex Galchenyuk this year.  Both played very well last season for the Habs, but I would be weary of their production, as the jinx happens way more often than a lot of players would like to see in a given year.

The blueline for the Canadiens already boasts the 2013 Norris Trophy winner in P.K. Subban and I look at what he was able to accomplish in that contract dispute-shortened lockout-shortened season and I have to believe that he will be capable of doing it all over again.  He'll be an early pick for sure.

Behind Subban, you will have the veteran presence of Andrei Markov (injury prone status, pending) and Rafael Diaz in support.  Montreal should be able to move the puck out of their own zone and through the neutral zone just fine, but it will be the tight situations that will be key to their success.

The Canadiens are going to win some games, likely keep themselves in the playoff race for most of the year, if not all of it, and in doing so, it will be Carey Price who will be collecting most of those wins and posting all of those points.  Price is a good keeper, fairly durable and good for some amazing performances (which translates into shutouts).

For the most part, I don't see anyone on their roster who is necessarily due to breakout, especially since I've warned of the jinx for both Gallagher and Galchenyuk.  It would be silly to say one thing and then suggest the other, now wouldn't it?

Word out of Montreal is that Aleksey Emelin will not be ready to go for training camp and will likely miss 1-to-2 months of the regular season after some off-season knee surgery.  Late November appears to be the earliest hopeful date for his return.  I had Emelin pegged as a pool-worthy defenseman, but the injury has knocked him out of draft contention, but he may be worth re-visiting at the waiver drafts.

Everyone is signed on and accounted for.  Canadiens will go into camp with a fairly locked in roster, if my table has anything to say about it.
Posted by opiatedsherpa at 3:45 AM