Is it just me or was the 2012 season too disenchanting as a poolie to really believe that the Washington Capitals are a powerhouse again for points?

In 2012, Alex Ovechkin finished way down in 55th overall in pool scoring, while Nicklas Backstrom dropped down to 164th and Mike Green was 622nd.  I know I began to wonder what their value was going into the shortened 2013 season.

2013 didn't exactly start off with a bang, but Ovechkin really poured it on and won the Rocket Richard Trophy, Braden Holtby went on a tear to earn the number one job, Green played a few more games (hardly shaking the injury-prone tag) and Backstrom was back up to scoring at a point-per-game basis.

Are the Capitals back to being a point-producing powerhouse?  Yeah, it certainly appears to be that way. 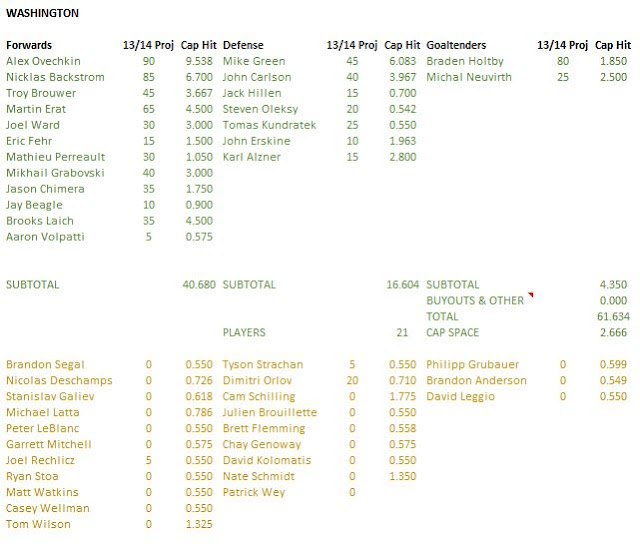 An Olympic year in Russia... I think this could make Ovechkin into a contender for 1st pick overall in a number of circumstances.  He will be buzzing around the ice like a crazy person and that's good for the Capitals.  When Ovechkin has that fire in his game, he is definitely in the conversation for the game's best player.

If Ovechkin starts going, Backstrom won't be too far behind and that gives him a pretty good shot at being a top end player for Sweden at the Sochi games.  I would put Backstrom in at a point-per-game this season, roughly, and he should be a pretty good pick-up this year.

Newcomer Martin Erat gets a breath of fresh air, moving from the stagnant offense of Nashville and into the whirlwind that is Washington.  I think Erat's numbers could possibly go up in a magnificent way and he could be a good sleeper for those who are thinking that no one recognizes him in Washington.

As for depth players, Troy Brouwer, Mikhail Grabovski, Jason Chimera and Brooks Laich appear to be your best options here, if you want to stay with the Capitals for your late round forwards.

How many games is Mike Green going to play this year?  This is how you're going to figure out when to take him this year.  If you think Green is going to play the whole year, you're going to take him nice and early and that is a reasonable gamble.  Green is injury-prone and my projection is based on a fair assessment of what he has been able to do of late.  I wouldn't be confident on getting Green at this projection, but I don't think I want him any earlier.

The Capitals seem to have a pretty good batch of blueliners this year and it should be an interesting race to see who makes it into their top seven to start the season.  John Carlson will be a lock for the team and should be a great pool option, while Tomas Kundratek and Steven Oleksy could surprise some and be real good late round defeneman picks.

Between last year's numbers and this Summer's invitation to Team Canada's Olympic orientation camp are good enough reasons to believe that Braden Holtby will be running with the ball for the Capitals in net this year.  I'm giving him starting numbers and starting projections and they are good, given the team that will be playing in front of him.

I would also consider Michal Neuvirth pool-worthy as a back-up, especially if you are in a deeper draft where back-ups come into play.  He'll get his share of minutes and he'll likely get more than his fair share of wins.  Neuvirth will also have the confidence of the coaching staff, should anything happen to Holtby, to just take the reins and continue getting starts.

The two depth defensemen, Kundratek and Oleksy are your best bets to breakout, sort of come out of nowhere, this season.  They showed some real promise at the end of last season and could be ready to build on that success.

Doesn't look like there is any injuries nagging the Capitals going into camp this year.

There is one key ingredient to the Capitals still sitting on the sidelines looking for a deal, playmaking forward Marcus Johansson.  Johansson has been quietly effective in his short time in the NHL, last season scoring 22 points in 34 games.  Johansson had a couple of injuries last season, but should be good to go this year.
Posted by opiatedsherpa at 12:15 AM