How about those New Jersey Devils?  They look very little like their 2013 incarnation on paper right now.  Changes aplenty would be the best way to describe the team's off-season, sprinkle in a little bit surprise and shock.

I don't know what you would consider to be the biggest surprise in the Devils' off-season, Ilya Kovalchuk "retiring" to get out of his long-term contract and play in Russia or management making the move to snag Cory Schneider out of Vancouver to succeed Martin Brodeur in net in the near future.  For immediate value, I would give it to Kovalchuk, just because of the hole that he leaves behind.

Nevertheless, the Devils are ripe with changes and new challenges, which could shape them into either a stronger unit or a lifeless lump of goo on the ice, struggling to find their identity.  I suppose there are some situations in between, but those are not as fun to write about. 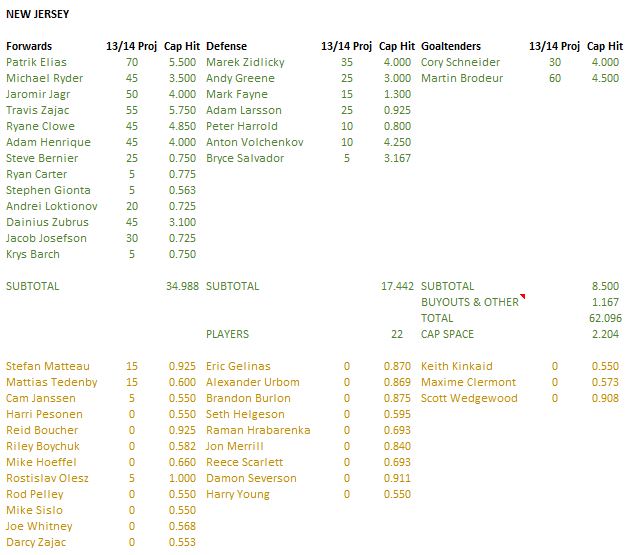 Without a doubt, the loss of Kovalchuk was going to hurt the offense of the Devils, but the dropping of a long-term, expensive cap hit didn't seem like a terrible trade off.  So the Devils made good use of their time and did the best they could with the free agent crop out there, picking up Jaromir Jagr, Michael Ryder and Ryane Clowe off the wire to work on their offense.  Sure, they won't blow you away, but they will chip in and round out an offense.

The real pick-up among the Devils forwards is going to be Patrik Elias, who plays with a consistency that is great for us poolies.  He'll be thrilled to be playing with Jagr and I think that will show in his game.

I am also expecting some better seasons out of Travis Zajac and Dainius Zubrus, who didn't have great 2013 seasons and should be better pool players than they have been of late.  I think if these two can really pick up their socks in the 2014 season, the Devils could have a pretty decent year and push for one of the last playoff spots in the Metropolitan Division.

The Devils should also get a bounce back season from youngster, Adam Henrique, who had a bit of a down year in 2013.  With the team getting a new look, he may be looked upon to really bring some new life and new energy to the team.  I think he'll be good this year.

The Devils blueline should be able to build on an okay 2013 season, where Marek Zidlicky and Andy Greene didn't fare too badly in the pool rankings in the shortened season.  I think these two can quietly continue on their path to some reasonable points in the 2014 season.

Adam Larsson didn't have a good sophomore season in 2013, hampered a bit by injury and couldn't generate the offense that the Devils could have hoped for, but a fresh start here in September could get the number two overall pick in 2011 back on course to being a good pool defenseman.

The Devils now have two pool worthy goalies, but the split in ice-time will be the real question going into the season, assuming that they both stay healthy through the year.  Right now, I am giving the split to Martin Brodeur, as it is his team and it could also be his farewell tour.  Cory Schneider will get his fair share of starts, due to the age of Brodeur, but I can't see it being his season, unless Brodeur was to get hurt.  Still worth a pick late, but I wouldn't expect him to get the big minutes.

No question, the Devils could really use a breakout player this year.  I think the best bet for a breakout will be Larsson, going into season three of his career.  Trying to wait on Jacob Josefson or Mattias Tedenby has grown tedious and unsuccessful.  I would give a mention to Stefan Matteau, who could be the closest forward to breaking out nowadays.

None to speak of.

On Monday, August 26th, the Devils signed their last remaining RFA, Adam Henrique, so they are good to go on the season.
Posted by opiatedsherpa at 3:15 AM