One of the two new teams in the Eastern Conference this season, the Columbus Blue Jackets are going to be a part of the Metropolitan Division and will have some pretty different division rivals, compared to their days in the Central Division and that might be a bit of an upgrade for them.

Coming out of the tight checking Central Division, the Blue Jackets will be somewhat battle-tested when it comes to their defensive play, so when they are up against the offensive flow of the Pittsburgh Penguins, Philadelphia Flyers, Carolina Hurricanes or New York Rangers, they may see a little bit more offense in the 2014 season.

The Jackets have a couple new faces from the end of last season and they only have a few openings at the back end, so it will be interesting how the team finishes their build for the coming year.  With a few of the offensive threats they have in place already, most of them have spent some time in the Eastern Conference already, so they should be well-versed in the style, which could be an advantage.

There is nothing about the Jackets that really has me too excited, but with some of the pieces they have on the team table below, they could just click well together and there is a chance that something good could come of all of this. 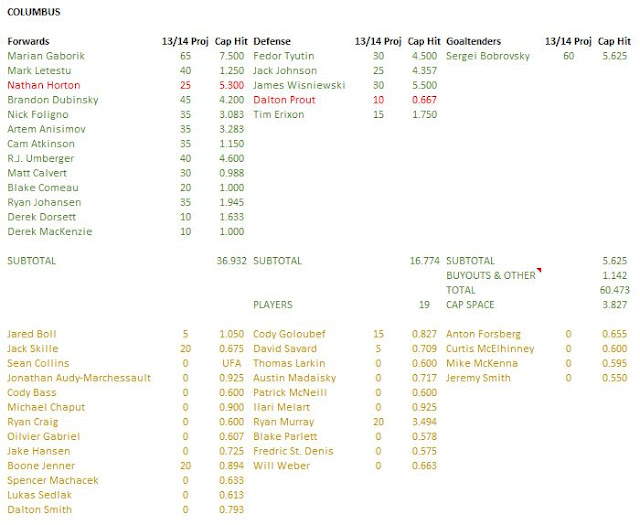 Buried in a smaller market, Marian Gaborik might be able to work in peace and quiet, under the radar of many and put some points together.  The make-up of the team feels a little similar to the early days of the Minnesota Wild, when he was just breaking out, without a great deal of star power, so the Jackets may only go as far as Gaborik takes them.

Another former Rangers forward, Brandon Dubinsky, will likely be another target for poolies coming out of Columbus.  The Jackets won't have too many players that will excite the poolies, but it did look like Dubinsky was bouncing back just fine from some down years in the Big Apple.

If you're looking at depth from Columbus, I might suggest R.J. Umberger, Mark Letestu, Ryan Johansen, Nick Foligno and Artem Anisimov, but they'll likely be better suited as later round picks, hoping that the Jackets can find some magic in their locker room.

The top three defensemen for the Jackets on the table, Fedor Tyutin, Jack Johnson and James Wisniewski, all have some talent that teams should be aware of this year and this is where most of the magic is going to happen for Columbus.  If these three can all stay healthy and have the season we know they can, I think they can make the Jackets into playoff race players this year.

Reigning Vezina Trophy winner, Sergei Bobrovsky, really turned it on in the 2013 season, thanks to some relative obscurity, before the media caught wind of his quiet domination.  Bobrovsky has the most interesting storyline, going back into the Eastern Conference, as he will be going back to somewhat of the same division that he was chased out of, when he played for the Flyers.  Playing in an air tight Central Division is very pro-goalie, where the old Atlantic Division, now the Metropolitan Division, has all kinds of run and gun.  I am weary of Bobrovsky heading into 2014.

On the blueline, the Jackets are waiting on Ryan Murray, who was the 2nd overall pick in the 2012 draft, and if he can make the jump to the NHL this year, I think he can make a push into the breakout category.

The latest word I have seen on Nathan Horton, the Jackets' new addition from the Summer, is that he will be on track for a December return.  For my pool, that would possibly make him into a good candidate for a waiver draft pick-up.  Horton underwent off-season shoulder surgery, which had him out for an extended period of time, but the Summer has been pointing at a December return.

There is also one more injury to report on, as defenseman Dalton Prout had been suffering from an abdomen injury, which required surgery at the beginning of August and the team expects Prout to be out for training camp and likely all of the preseason.  His projections, albeit low to begin with, will likely have some rust that also needs to be shaken off, so he won't likely be a good sleeper.

All their key restricted free agents have been dealt with.
Posted by opiatedsherpa at 5:30 AM