The Tampa Bay Lightning earned a dubious distinction in the shortened 2013 season, being the first team in NHL history to have the top two scorers in the league and not make the playoffs.  Sure, it was a good season to have Martin St. Louis and Steven Stamkos in your pool team, but it was not a good year to be a Lightning fan as a whole.  That one hurts the hockey fan's soul a little.

The goal for Tampa in 2014 will be to bridge the gap between their top two players and the rest of the team, as the depth was certainly called into question in 2013.  There was a significant drop-off between the top two players to anyone else on the team in pool scoring, as Teddy Purcell was 3rd at 68th overall and Ben Bishop, who didn't play all year with the Lightning, finished 165th.

The Lightning were able to acquire some talent during the off-season, but for the most part, stayed with the status quo.  I hope the strength is up in their superstars, because it looks like they may have to carry the load again this year. 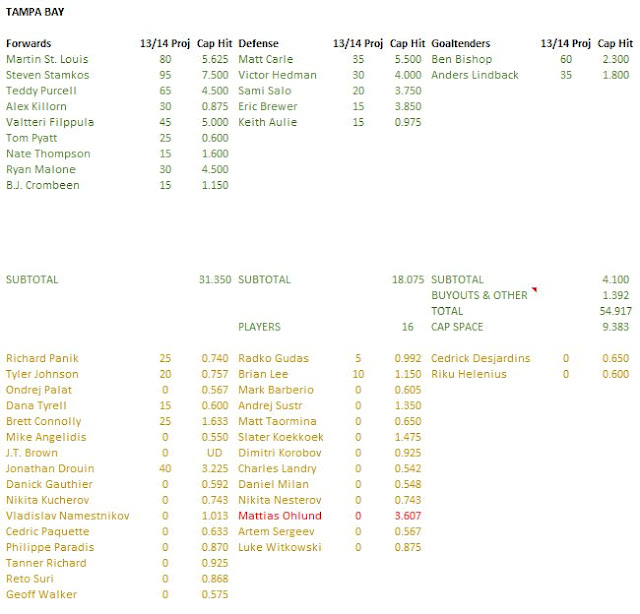 The forwards are a very shallow group, even if a kid like Jonathan Drouin joins the team and does well, it just doesn't look like it will be enough.  With the number of spots open up front, Drouin will likely be given all kinds of opportunities to succeed and they will likely be with talented linemates.  He could very well exceed 40 points, if everything goes well for him.

I don't think much has to be said about Stamkos or St. Louis, which is why they didn't get the lead in this section.  They are too talented not to be noticed by poolies.

The addition of Valtteri Filppula is an interesting one, likely a highlighted move by former Red Wings captain, Steve Yzerman.  Filppula could give a bit more credibility to the forwards and he may make a couple players a little bit better this year.  I am curious to see who lines up with him.

Otherwise, it is pretty barren in Tampa Bay.  Players like Ryan Malone need to start producing soon or else they'll be quick to see Summer once again in 2014.

As thin as the forwards are for Tampa, it doesn't get much better for the blueline.  The headliners, Matt Carle and Victor Hedman, are going to be reasonable draft defensemen, but they are nothing close to the top end defensemen that you're going to be drooling over this year.  Both defensemen could be sneaky picks, if you get them in good time, because they could make a little push this year, when everyone isn't looking.

Beyond those two, there are some injury-prone concerns in Sami Salo and Eric Brewer, while Keith Aulie hasn't grown into his NHL shoes quite yet.  Brian Lee is a possibility for being pool worthy, but it would seem more likely if the team had more offense as a whole.

The goalie situation is a good one, since it will likely be a talking point this season.  I think Ben Bishop is likely the favourite at the start of camp to be the number one guy.  Bishop has had more time in the AHL and has done more with that experience as well.  Anders Lindback has size and some athletic ability, but I think his limited experience will hurt him in the end.

With those added minutes, I think Bishop is the best possibility for a breakout player for Tampa, followed closely by Drouin, who will have to dazzle in his rookie season for the team to find any sort of success this year.  I don't trust the Lightning very much, but these two players I would take a chance on.

So far, so good.  Nothing to report.  Unless you're Mattias Ohlund.  He has been injured for so long, he barely even fits the category of key injuries.

Everyone of note is signed on and ready to go.
Posted by opiatedsherpa at 1:00 AM