The current era of the Pittsburgh Penguins is an exciting, yet anxious, one for their fans and their poolies alike.  Pittsburgh has a couple of the NHL's best players, but every time they take the ice, everyone does seem to hold their breath, hoping for a safe and healthy game for their superstars.  That can't be easy.

The Penguins were another one of those teams that had to work hard to come down to the salary cap ceiling, which dropped for this season, as it has been reiterated several times already in these pool projection posts.  Gone are Jarome Iginla, Brenden Morrow, Matt Cooke, Tyler Kennedy, Douglas Murray and Mark Eaton and they were only able to really add one solid roster player in Rob Scuderi.

By my count, the Penguins will have three or four spots up for grabs among the forward ranks for opening night, but they also only have about $2.1 million to work with, which means this is going to be some cost-efficient depth, unless something more happens.

Is this a real concern for the Penguins?  Probably not.  Pittsburgh has so much talent and so much scoring ability in their top nine forwards right now, that it should make up for whatever depth they pick up and play less than 10 minutes a night. 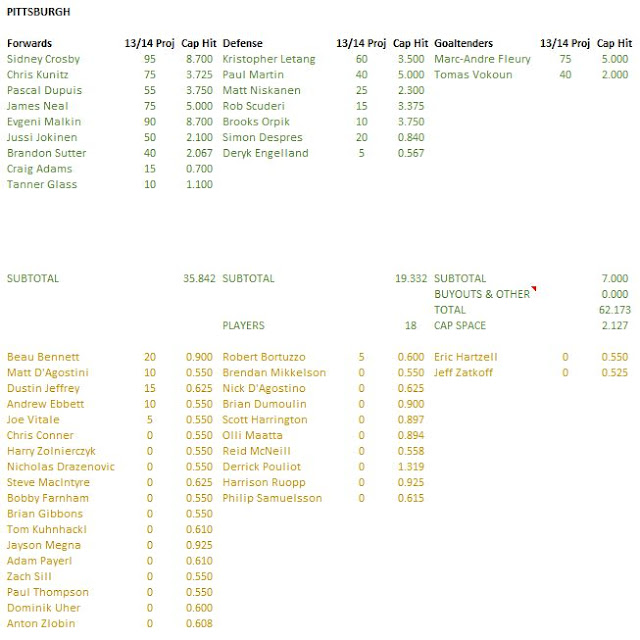 In what should be a foregone conclusion, Sidney Crosby is expected to be the number one pick in likely 95% of the drafts this year.  In the shortened season, he compiled a scoring rate of 1.56 points per game, which was incredible.  Having only played 36 of 48 games, he still finished 5th in pool scoring.  So the question becomes, how many games is Crosby going to play in 2014?

Then when Crosby is picked, where do you take Evgeni Malkin?  Malkin didn't score at quite the pace that Crosby did and he played less games last year, so what do you do?  It is hard to bet against the big Russian and I don't think many people will bet against him, so expect him to be a top pick again.  I think he'll be in the neighbourhood of the top players again.

Chris Kunitz made a name for himself last season, riding the coat tails of Crosby and there is no reason why that shouldn't happen again this year.  James Neal will be a trigger man again this year and should be better than his current projection, but being a bit conservative, due to his fragile teammates.  Pascal Dupuis and Jussi Jokinen also look like they should be good depth players this year and they could also exceed their expectations, just by skating beside the top guys.

A late-season injury cost Kristopher Letang his first Norris Trophy last season and I think that could serve as motivation to be even better than last season.  Letang scored at a shade over a point per game, but in the long season, I would expect a few more point droughts than in the 48-game season.  I still have Letang as the highest scoring defenseman and you may want to lift him up a little bit higher in your priority this year.

If you're looking to Pittsburgh for a little bit more blueline help, have a look at Paul Martin, Matt Niskanen and Simon Despres this year, since they should be able to cash in on their ice-time with plenty of assists that will keep your pool team going.

After the playoff run, the Penguins coaching staff did give a vote of confidence to Marc-Andre Fleury, saying that he would again be the starting goalie for the 2014 season, but you have to believe that Tomas Vokoun will work to earn more minutes than anyone expects this year.  For my money, I think Fleury will get those minutes that will make him the starting goalie, Vokoun doesn't have a shelf life that is as long as Fleury's, so the Penguins have to go with the guy who is going to last longest and lift his confidence.

I think we got a pretty good taste of what Beau Bennett can do for the Penguins last season, so he should be pegged as a possible breakout player for the Penguins.  There is a good chance that he will make that push that gives the team no choice, but to throw him in the line-up, but with the cap issues that they have, even the $900k against Bennett could be an issue.  If he can make the opening night line-up, expect the Penguins to ship someone out.

Sounds like Crosby underwent a procedure to clean up his jaw, just after the playoff run, but that sounds like all that the Penguins had going on.  Everyone should be happy and healthy to start camp.

All players are signed and ready to go.
Posted by opiatedsherpa at 1:45 AM