It is hard to think of a team that has been tinkered and changed more in the last 10 years than the New York Rangers, yet they still compete well for a playoff spot in the Eastern Conference.

Last year's trade deadline was a good instance of how much this team likes to tinker and change with the deal that sent Marian Gaborik (and prospects) to Columbus for Derrick Brassard, Derek Dorsett and John Moore (plus a pick).  A deal that really shook up the core of the team and actually did some good for the Rangers down the stretch, as Brassard played well upon his arrival.

With all the tinkering and changing, it's hard to really get a grip or an idea of what the Rangers are going to be like from one year to the other.  Henrik Lundqvist remains the constant of the team, the backbone, and as long as they have him tending their net, they seem to just move along.  If you go from the net outwards, their defense looks decent on paper and should provide their anchor with good support, while the forwards try and muster up some offense.  The offense will be the real question mark. 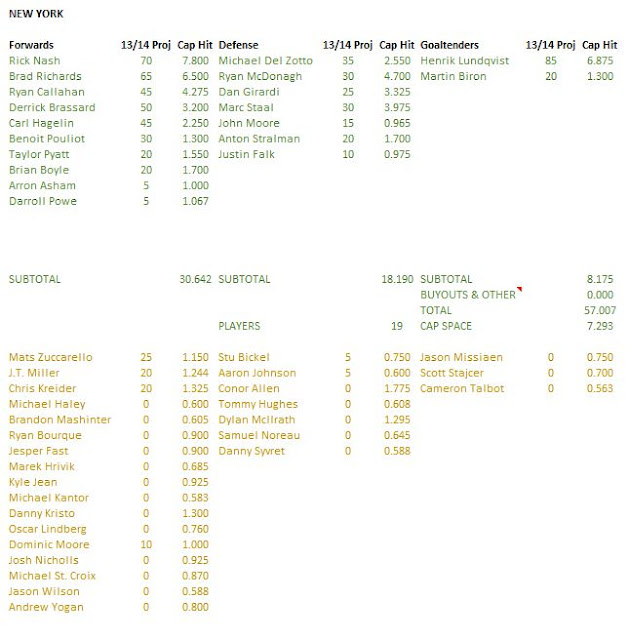 
The forwards are a curious bunch that has some talent among them, but sometimes it's hard to believe they have the passion to really put 100% forward every night.  Between Rick Nash and Brad Richards, the Rangers have two high-calibre players that are capable of doing great things, but when it has come down to it over the past few years, they have been somewhat of a let down.  Both players are still good pool players, but I would really temper those expectations down a notch or two.

Derrick Brassard, as mentioned earlier, could be a breath of fresh air coming into the 2014 season, since he had such a strong finish to last season, he could very well keep that momentum going and put together a competitive year.  Maybe the bright lights of the big city were exactly what he needed.

Ryan Callahan and Carl Hagelin should also be reasonable options for your pool team, more so Callahan, since he sees more crucial situations, but they should be good for some points this year.  I've tried to rank Callahan higher, but around the 45-point mark seems to be really good for him now.

The Rangers blueline has done well to improve year over year and that has a lot to do with their key young prospects, like Marc Staal and Ryan McDonagh are getting playing time and maturing well with that time.  Both players are going to be very reasonable defenders, both likely to go in the middle of the pack for defensemen, possibly higher.

With two steady young defensemen progressing consistently, we break to Michael Del Zotto, who has all kinds of offensive upside, but has seen his share of development issues, having a good year and then finding some setbacks.  I think this year, he should be good to bounce back and if he and his fellow defenders can stay healthy, it could be a good year.

If the Rangers blueline is going to progress as a unit, that will definitely make Henrik Lundqvist's job a whole lot easier.  Another big plus for King Henrik is that he is progressing along with them, being their goaltender, which will go a long way as each other's confidence grows at the same time.  I have Lundqvist to do quite well this year, not quite tops among goalies, but looking at the team in front of him, I don't think it is out of the question.

The Rangers have been waiting on some of their young forward talent to really jump up and seize a spot in their line-up, but guys like Chris Kreider, J.T. Miller and Mats Zuccarello have all found more reasons to be in the press box than on the ice succeeding.  With spots available in the forward ranks, this group will get their chance to breakout, but it will be up to them to do so.

The Rangers had some concerns with some off-season surgeries, but most of them were early enough to have healed for training camps this year.

The biggest problem with the Rangers' offense is that their top scorer from the 2013 season is still unsigned.  Derek Stepan, who led the forwards with 18 goals and 26 assists in all 48 games, is still a restricted free agent and this is a big problem.  With Stepan scoring more than the two highest paid forwards, what are the Rangers to do?  This becomes an even bigger problem, because Stepan is playing like he could be doing this for a while in his career.  How will the Rangers cope with this situation?
Posted by opiatedsherpa at 2:45 AM