The order has now been set and we can now start aligning our stars for when Week Ten gets underway and that new blood is officially injected into our lineups and the real races begin.  I suppose we should look at the week previous before anything, so here comes the review of the past week.

I would be taking a rest too, if I posted a 10-point week as well, like Braden Holtby of the Capitals did in Week Eight.  Holtby is the first player to post a double-digit week this season, going 4-0-0 with a shutout in the week, absolutely dominating the last week before the Waiver Draft happens.

Holtby got his week off with a bang, making 33 stops for a shutout against the Oilers on Monday and then followed that up with wins against the Jets, Lightning and Maple Leafs and has regained that same confidence that helped him finish 2nd overall in pool scoring last season.

With his 10 points, that brings his season total up to 32 points on the season, which now ranks him 4th overall in pool scoring and is now the top goaltender in the pool, much to the delight of Jeremy, who took him with the 7th overall pick in the draft this year.  Holtby was also the 5th goalie taken, held to some high standards after last season, most certainly.

And of course, this brings us to yet another week, where the Player of the Week takes us directly into the Mover & Shaker of the Week, as Jeremy's team becomes the fourth to have both honours associated to it in the same week.  John S., Brian and Scott each had the same in Weeks Two, Three and Four. 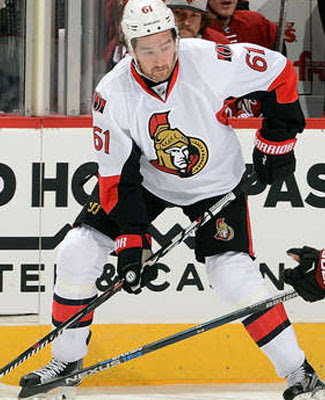 Jeremy's team finished with 36 points, one of only two teams to eclipse the 30-point barrier in the week, as most teams wanted to tank a little bit to improve their Waiver Draft position, not Jeremy.  Oh, no... he's made his move for the top of the pops, moving into a tie for 1st place in the standings, finishing 2nd in the week, thanks to his lower goal-scoring totals.

Besides having the Player of the Week, Mark Stone helped lead the way with 5 points of his own, which was also complimented by Matt Duchene of the Avs and Tomas Plekanec of the Habs, each picking up 4 points as well.  Kris Letang of the Penguins chipped in with 3 points and then there were a lot of deuces and singles to help out as well.

There were only a couple of zeroes on his team, but I don't think that will be enough for Jeremy to drop anyone at the Waiver Draft, since there isn't a great deal out there that is too much better.

If we've noticed anything with this big jump, it just takes one really good week, once your team is in the top 10, to jump into the money.  Jeremy's team was hovering around 5th to 7th to start the year and now his team jumped into a tie for 1st place.  Sure, the rest of the pool dogged it in the week and that helped a great deal, but at least we all know it's possible.

In the basement this week, it's John R., who has now picked up his second Basement Dweller of the Week nod of the season and just in time, too!  His poor week ensured that he would be using the 1st overall pick in the Waiver Draft, to which he dropped Carter Hutton and took Mike Condon, but we'll have more on that later on in the day or tomorrow, for that matter.

John's goaltending certainly hasn't been the worst in the pool, thanks to Marc-Andre Fleury, but he'll need to address the rest of his scoring in the 2nd round, since his forwards are tied for last in the pool, through eight weeks, with 78 points.  Oh yeah, his defense has bottomed out as well, tied for last again, this time with 16 points.  For argument's sake, his goaltending ranks 14th through eight weeks.

Patrick Marleau was John's biggest contributor in Week Eight, picking up 3 points, while each of his goalies picked up wins in the week.

Nevertheless, it sounds like he wants to make a push out of the basement, so we'll see how those new picks work out for him, starting in Week Ten.

So, Week Eight saw a huge dynamic change in the trophy hunt, as we have a newly configured top three.  John P. moved up from last week's finish of 2nd place to 1st place, while Jeremy jumped from 5th to 2nd, leap-frogging Neil, who stayed in 3rd place and Dale B. fell out of the money, down into 4th place.

Only 4 points separate 1st to 4th place, while Troy is 10 points out of 1st, 8 points out of 3rd and 6 points out of 4th.  After Troy, it's John S., who is already 6 points back of 5th, then it's another 10 points down to the big group, which isn't separated by very many points again.  This season is far from over.

This is the week where teams decide on whether or not they want to join or improve their standing in the rookie pool, as Ryan and Troy keep their own pace, each picking up 4 points from their rookies in the week.  Still, Ryan holds a 21-point lead in the contest, but there are plenty of freshmen to take in the Waiver Draft, so there is plenty of intrigue here, as we look to swap out some players.  Will anyone use both picks for rookie forwards and hope that they can catch Troy and/or Ryan?

Speaking of Ryan, his team was eliminated from the goalie survivor pool this week, as Pekka Rinne failed to pick up a win for the Predators in Week Eight and his other goalie, Joni Ortio, spent the week in the AHL, as the Flames now have three healthy goalies.  Ryan was hoping that Rinne could have offered up a win, so he could improve his chances in this pool in the Waiver Draft, but that isn't to be.  He'll likely be looking to pad his lead in the rookie pool now.

Scott, Stuart, Dale B., Jeremy, John P., Allan and Derek W. are all that remains in the pool, as we head into one of the busiest weeks of the season, where there will be 50 NHL games to be played.  A huge finish to the first segment of the year.

This week, I've added a link to the entire race in the PIM pool, just in case you were not in the top five, you could see how far back you are and decide whether or not you wanted to goon it up this year at the Waiver Draft, trying to chase down Wes, who will definitely be gooning it up this week.  If you want to see the whole race, click here.

Wes and Benson's team were tops in the week, each picking up 27 PIM, Wes adding to his lead, which now sits at 51 PIM, which will be tough to beat right now, but with the right combination of goons and just the right amount of agitation, it could just work in someone else's favour.

It was a statistically horrendous week, but Jeremy doesn't mind, I'm sure.  Scoring was down considerably, working at 12.2 points per NHL game for the pool, down from 13.1, which did seem to add up, when you looked at all the numbers down the line.  Skater participation and goalie minutes were up slightly, which meant that either the defenses were getting better or there were a lot less pucks hitting the net on a regular basis.

With 50 games on the NHL schedule this week, let's hope that things pick up a bit, just before we swap out all of our duds.

The timetable for Derek Stepan dropped on Monday morning and it's about what we were thinking, 4-to-6 weeks on the shelf for the scoring forward. Okay, that's exactly what I had forecasted this weekend. Yeah, I've seen it before.

With that being said, that will take Brian into either 3-to-5 weeks into a 9-week segment without Stepan.  Is that enough to make the drop?  Probably not.

Montreal is saying roughly the same thing about Carey Price, saying that he won't be re-evaluated for six weeks, but his lower-body injury won't require any surgery, just a whole lot of rest to heal.

That hasn't stopped John S.'s bravado, as he's still giving Stuart and Benson the business in the 1st round picks side bet, where he has Price pitted against Corey Crawford and Frederik Andersen, still confident that he can win this bet, despite losing out on another six weeks.