One skater and two goalies each finished the week with 8 points in Week Seven, which makes the tie-breaking process extra easy this week, especially since our skater did score at least one goal in the week. Henrik Sedin, on the back of one massive game against the Chicago Blackhawks on Saturday night, earned the nod as Player of the Week, clipping Craig Anderson of the Ottawa Senators and Martin Jones of the San Jose Sharks from the weekly mention.

In total, Sedin finished with 2 goals and 6 assists in four games played this week, picking up points in every game in the week, starting a 4-game point streak of his own in the process.  An assist against Montreal on Monday, followed by another apple against Winnipeg on Wednesday, just before the goal and 4 assists against Chicago on Saturday and then finally, another goal against New Jersey on Sunday night.

This brings his season total up to 7 goals and 14 assists in 22 games this season, just a point shy of a point-per-game average.  This has him ranked 24th overall in pool scoring, hardly showing any signs of slowing down at 35 years old.

Clayton snagged Henrik with the 77th overall pick in the draft, down in the 3rd round, and has seen a pretty good bargain come out of this pick.  By virtue of his ranking, he could have been a 1st round pick this year, finding somewhat of a bounce back year under his belt.

There was some considerable moving and shaking going on in the standings, as John P. had a monster week, amassing a season-high for the pool of 38 points.  When teams are hovering in the 20-point range, John nearly doubled that and his team shot up the table, putting his team in the money conversation. 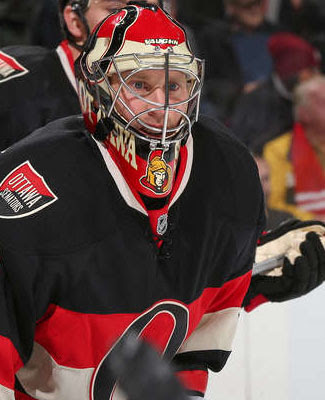 John had a couple of players in and around the Player of the Week conversation, having one of the two goalies in the mix, Craig Anderson's 8 points, while he also had Daniel Sedin, who finished with 7 points with the Canucks.

Five more of his players finished with 3 points a piece, which by my count, already has his total up to 30 points through seven players and then he got some nickels and dimes through the rest of his lineup, making good use of that spare change.

Only two of his players failed to get points in the week, neither were by injury, as his team is working at a fairly healthy pace.  His team ranks 4th in skater games played, only four games back of top spot and 6th in goalie minutes played, a few games off the pace there.

So, how good was that week?  John's team jumped up from 7th to 2nd place, giving hope to many teams that are in the top 10, dreaming of money spots.  There isn't a great deal of separation, which is good news for those teams looking to be competitive through the Waiver Draft and this huge jump is possible, with a lot of teams having quite a bit of unrealized potential in their lineups yet.

I don't think we'll be talking about too much unrealized potential in Grant's lineup, as it kind of bottomed out in Week Seven, picking up 9 points, falling short of double digits for the Basement Dweller for the first time since Week One.

This is Grant's second time in the Basement, the first time coming in Week Five, where he dropped down to 24th place and this time, a couple weeks later, his team now sits in 26th spot.

Injuries and a bad gamble are to blame for his drop-off in the standings, as his side has three injuries, an illness and a consistent healthy scratch on his team at the end of the week, the injury to his goalie has lasted much longer than expected, another injury on the Injured Reserve for a while yet.  Obviously, the Waiver Draft can't come too quickly, but what is he going to do?

Rookie scoring.  That's what he's going to do.  Spoiler alert.

As you've probably noticed already, we had ourselves a change in the climate of the trophy talk, as Dale B. has a new team to worry about below him.  John P. is coming for him and coming fast!

Both John and Neil, tied with 173 points, are only 5 points behind Dale, as the race for the bobblehead trophy is staying relatively hot, unlike last year.  John S. and Jeremy are 6 points out of the money talk, but one good week and they could be right in the thick of it, as John P. showed us this past week.

Ryan's rookies picked up 3 points in the week, extending their lead to 21 points, but Ryan's team is well up in the standings, meaning that there will be a good number of teams looking to improve their teams with rookies and picking out of the good crop, while Ryan, only 14 points back of 3rd place, might be left no choice, but to choose some veteran players, since getting his money back may not be as big of a priority.  We'll soon find out, since the Week Nine Waiver Draft is only a week away from getting started.

Troy, who sits in 2nd place in this pool, is 6 points better than Ryan overall, so it will be interesting to see how the week plays out, who gets the better pick next week to improve their standing here.

As you may have noticed, if you have been following along on the blog this week, we kept all eight remaining participants in the survivor pool, but it was down to the wire for Derek W., as he needed a last-ditch effort from Devan Dubnyk to keep his team in this race.

It's going to be another busy week, with 47 NHL games on the docket, so these eight teams will likely have ample opportunity to stay in this pool.  It will be the All-Star weekend, when teams will really sweat it out, which isn't too far away... Week Twelve, I do believe.

The post-draft favourite for the PIM pool, Wes' team, flexed their ass muscles a bit, spending 44 PIM in the box this past week and opening up an incredible lead of 40 PIM on 2nd place in this pool.  Eric's team dropped off the map with the equivalent of six minor penalties in Week Seven, while Dale B.'s team, which not only leads the overall pool, jumped into 5th place, after a 37-minute week.

Wes' side will likely be looking for some big minutes at the Waiver Draft, sitting in 25th spot after Week Seven, so this could be a runaway pool before it's all said and done.

It was a great week for scoring, as we hit a season-high in overall points collected with 614 in total, just a shade better than 13 points per NHL game on the schedule.  Remarkably, we were down in participation from both our skaters and goalies, so the scoring rates were much better than per NHL game played at each position.  That's good news, right?  Let's hope that the trend continues upwards.

Likely thanks to Wes' goon squad, the time spent in the box was up over 500 minutes as a group, picking up 511 PIM in total in Week Seven.  That number is expected to increase as the weeks go on, specifically when we add the goons from the Waiver Draft in Week Ten.

A lower-body injury forced Carolina forward Nathan Gerbe from Sunday's game against the Kings and he wasn't able to return.  As of Monday morning, there was still nothing out there about how bad the injury was, so we'll play wait and see.  If it's a day-to-day injury, we probably won't have too much more on it, but if it is a longer-term issue, I'm sure we'll have an update for you.

Gerbe is a candidate for a drop for Stacey M.'s team, as he has only produced 3 points in 20 games this season, not a great start to the year.  Stacey's team is in the middle of the pack, so a good Waiver Draft pick could still boost her team into the conversation.

Finally, a healthy scratch nod to Jiri Tlusty, as the Devils opted to sit the veteran Czech forward against the Canucks on Sunday night.  Tlusty is another player who hasn't had much in the way of production, picking up 3 points in 16 games, a leading factor towards his scratch, I'm sure.

Kristy & Don are sitting in limbo, down in 23rd place in the standings.  Their team isn't really in the mix for any of the mini-games and they're well off the pace for the big money, but if I had to guess, they'll make the most out of their two picks, trying to get back into the race.