Winnipeg Jets forward Mark Scheifele is on an absolute tear at the moment, dominating the score sheets and helping his side to the top spot in the Central Division and tied for tops in the Western Conference and Week Eleven was a demonstration on just how much of an offensive force he is.  In four games last week, Scheifele finished with 5 goals and 6 assists, tying a season-high for points in a week with 11.

This makes back-to-back weeks with the Player of the Week nod for Brian's team, but unfortunately for his side, these individual honours haven't been enough to lift his side into the big mentions.  As good as Scheifele's week was, it made up more of a third of the output of Brian's team, so the consistency through the lineup isn't quite there.

Tony's team, however, had some consistency throughout his lineup in Week Eleven and that propelled his side to a Mover & Shaker mention.  His team was getting some balanced scoring throughout the week, hanging around the top of the weekly table through all of the goalie posts, finishing with 41 points when the final horn sounded on Sunday night. 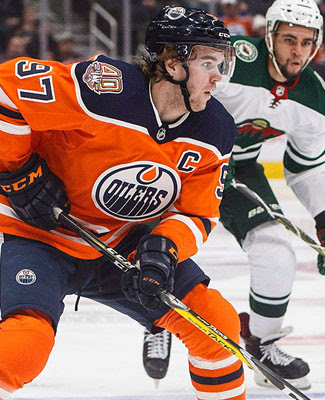 All but one player on his active roster was able to put up points in the week and his crew was led by the 1st overall pick in the draft, Connor McDavid of the Oilers, who finished with 8 points.  Anthony Cirelli of the Lightning, Bo Horvat of the Canucks, Brandon Saad & Duncan Keith of the Blackhawks and Mikko Koskinen of the Oilers all finished with 4 points each, which adds up really quickly.

A big week like this certainly does pave the comeback trail for Tony's side, as his team climbed up from 17th to 14th in the standings and you've got to believe that the next step up will be making it into the top 10.  His team only sits 10 points out of there right now and if his team can keep up this pace, it'll be up there in no time.

Tony's team found a season-high in goal scoring in the week, collecting 14 tallies among all of his skaters and also had a season-high in wins with 3 from his two keepers, so everyone was contributing at the same time and good things happened.  Now, it will be a matter of consistency to achieve all of those other goals.

There just hasn't been a lot of luck on Eric's team this season, as injuries have really kept his side down and there wasn't a whole lot he could do at the Waiver Draft about it.  He certainly wasn't going to drop Patrice Bergeron of the Bruins or John Klingberg of the Stars, there was just no upside great enough to do so.  There is word that both of these players are on their way back, but it's much too late to save his team from the 16-point week it had in Week Eleven, settling him into the Basement Dweller nod for the third time this season.

Nikolaj Ehlers of the Jets had a pretty good week, trying his best to save the team from this infamous fate, but his 5 points were not enough to carry the load.  Seven players on his team were unable to register points in the week, three of them due to injury and another was a healthy scratch all week and that has now dropped his team down from 21st to 22nd.  If these injured players can't return soon, he may see his team drop at least one more spot in the next week or so.

There has been a shift at the top of the standings, as the top three has all changed around and we have a new name amongst the money teams after Week Eleven.  Troy has moved back into 1st place after a 2-week absence, finishing the week with 314 points.  Stuart has moved back into 2nd place, only 2 points back and Grant finally finished a week in the money spots, 3 points back of Troy and 1 point up on 4th place, Stacey M..

Kristy & Don are still hanging around in 5th place, the only other team to crack the 300-point mark through Week Eleven and then Ryan and Mike are still within a Mover & Shaker week away from rejoining the conversation.  It's been a really good season, so far, and it's only going to get better.

Derek B.'s Waiver Draft strategy has started to pay off in Week Eleven, as his group of freshmen tied a season-high in weekly points with 9 among his five active rookies.  Rasmus Dahlin of the Sabres led the way for his group, finishing with 5 points in the week.

Derek's team still has some work to do to catch Clayton's team, which had 6 points in the week and still holds a 21-point lead, thanks again to Elias Pettersson of the Canucks.

I'm not sure if anyone else noticed, but I did, inputting all these numbers... the amount of games going to extra time has gone up in a big hurry in the last couple of weeks and that has really boosted the shootout numbers and in saying that, we have a new weekly high in total shootout goals this week!  This mini-game may have gotten the boost it really needed.

In total, we saw 12 goals in the skills competition and four teams in the pool (John P., Jesse, Steve and Kristy & Don) all had a pair for their side.  Four teams have a total of 6 markers this season, holding the lead currently and they are Grant, Jeremy, Mike and John P., named off in order of their success rate.

The pool has collected 65 of 80 shootout goals in the league this year and we've accounted for 198 of 244 total shots taken too.  We haven't had all the shots, but we've done well to collect most of them.

It was a week of highs all the way around, as the game-winners were also up this week, as the pool collected 39 winners out of 51 games this week.

Stuart's team continues to lead the way in this category, racking up 23 winners, so far, and 4 of them came this past week to lead all teams there as well.  His team now holds a 4 tally lead on Clayton's team and there are three more teams up at 17 winners as well, still in the hunt.

Troy's team was Week Eleven's goon team of the week, spending a season-high of 33 minutes in the penalty box from Monday to Sunday.  His team hasn't been very pugilistic this season, ranking 12th in penalty minutes with 175, but it was their time to shine for a couple minutes or less a few times.

Stuart also has the lead here still, up with 231 minutes, so far.  Jeremy's team is 2nd-best with 200 minutes, so this could be Stuart's title for the taking.

It's now four straight weeks for the final four surviving teams to make it through to the next week.  Wes, Troy, Stacey M. and Jeremy all posted at least a couple of wins in the week and they moved through to Week Twelve with ease.

It's a busy Week Twelve coming up, 55 games on the schedule, but Jeremy's team is only sitting with three projected games with one injured goalie, so he'll have to bank on Connor Hellebuyck and the Winnipeg Jets staying hot.

742 points were collected in Week Eleven, setting a new season-high there, thanks to some consistent participation from our new players from the Waiver Draft and some players coming back from injury.  The pool averaged 14.55 points in the 51 games on the schedule last week and we should all be keeping our fingers crossed that we can maintain that kind of scoring rate for the 55-game schedule we'll have in Week Twelve.

It's time to make some hay while the sun is still shining!
Posted by opiatedsherpa at 10:57 AM