Well, it's time to take down that Festivus pole and resume normal life-living activities.  "Wait, how many more days off do we get?  What's this for again?  Christmas?  Okay, I guess."

The holiday season is upon us and with the NHL schedule finishing off yesterday until Thursday's restart, you can chew on this week's Newsletter a little longer.  Hopefully, it's not as dry as your turkey this week, but it very well could be.  I better add some gravy to it.

The Columbus Blue Jackets must have looked at this week in the schedule and said that they really needed some results, so they leaned on their number one goalie, Sergei Bobrovsky, and he gave them one hell of a week.  The Jackets played in four games, including a back-to-back, Saturday and Sunday, and he played them all... and won.

This is the first 12-point week since Week Five of the 2017 season and the 13th week of its kind, since the hockey pool website was setup in the 2007 season.  In that 2007 season, back when it was only the selection sheet pool, was the only time we saw a 13-point week, which has been the recorded record.  We have never seen a 13-point week in the draft in that long.

For Kristy & Don, this big week has certainly kept their money hopes alive, as they made up some ground this week, thanks to Bobrovsky and company.  The duo have been getting some great performances, including the Columbus goalie, who is now up to 16 wins and 36 points in 27 appearances, good enough for 44th overall in hockey pool scoring, 3rd among all goalies.

For the second time this season, Stacey M. has seen her team rise to the occasion of the Mover & Shaker nod for the Newsletter and that was just in the last three weeks of the season.  Her team has really been fired up since the activation of our Waiver Draft picks and her only selection in the swap, Travis Zajac of the Devils, has only been a minor help.  A switch must have flipped for her side, because it's rolling along even better since we flipped over at the start of Week Ten. 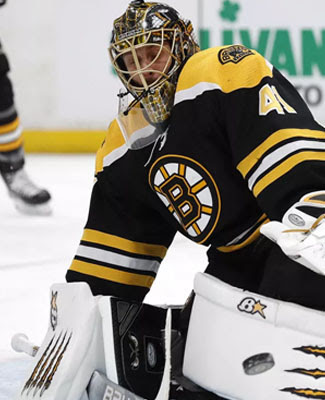 With 38 points in Week Twelve, there was no tie-breakers necessary to figure out this one and if you have been watching the goalie posts through the week, her team practically went wire-to-wire on this week, really cruising along.

Boston goalie Jaroslav Halak has probably been the bargain pick of the year, again leading all players on her team this week with 9 points and has been just instrumental in her team's success, earning all kinds of minutes in the Bruins' crease.  Halak's teammate David Pastrnak has been no slouch either, finishing the week with 8 points, and Nashville's Roman Josi had a good week as well, finishing with 5 points.  Both Nathan MacKinnon of the Avalanche and Carey Price of the Canadiens each had 4 points, rounding out the top performers of her week.

Maybe the most notable statistic for Stacey's week was that her team had five active players on her roster without a point.  That's getting the top guys to really carry the load, when you're up in the Mover & Shaker with only nine players scoring for you.

We'll certainly have more on her team's climb in the standings shortly, but what I can say here is that things are going very well for her side the overall scheme of things.

How about a 'welcome to the hockey pool' moment for Jesse and his team in Week Twelve, as he gets initiated into the Hall of the Basement Dwellers.  It's certainly not a prestigious honour and an honour that not all teams have found their way to earning, remarkably, but one in your first year almost is expected with new teams joining every season and this is Jesse's moment, I guess.

Jesse's team finished with a weekly-low of 16 points in Week Twelve, no tie-breakers necessary this week.  It ties the season-high for points in the Basement Dweller nod and it's the highest ranked team at the end of a week with a nod at 13th place.  When you're in the top half of the standings, running into a dweller week is very disheartening, because it means you've likely dropped a lot of points between your team and the money sides.

Gabriel Landeskog of the Avalanche led the way for his team with 3 points, but five players didn't register a point in the week, same as our Mover & Shaker, but as you can see, his team leaders were not nearly as productive.

The gap to the money is now 49 points, which isn't at all impossible at this point of the year, especially with one more player swap to go.  With only one injury today and a day-to-day one at that, he may not be able to do a whole lot with his team when the next swap is to come around in January.

The top five of the standings really did some dancing around in Week Twelve, really livening up this hockey pool season.  Troy's team went from 1st to 5th, Stuart's team lifted back up into a tie for 1st place, but gets it on the tie-breakers, while the Mover & Shaker, Stacey M., entered that tie and take 2nd place and Grant stays steady in 3rd.  Kristy & Don, holder of our Player of the Week, moved up a spot to 4th and it's a tight-knit group in the top five, as there is now a 14-point gap to 6th place.

A team is going to need a solid Mover & Shaker week from the top 10 to crack into this group in the top five, especially since 10th place, Steve's team, is 34 points back of 5th.

Three teams were tops in the rookie scoring for Week Twelve, finishing with 4 points in the week.  Derek B., Steve and Wilton all led the way in the week, which isn't a record, by any means, but still isn't too bad.  Linus Ullmark of the Sabres for Steve's team and Andreas Johnsson of the Leafs for Wilton's team led the way, posting those 4 points that both teams needed.

Clayton's team finished with 3 points in the week, so Derek's team only made up 1 point on the mini-game race, so the lead now stands at 20 points, 53-33.

There were plenty of games that went to extra time in Week Twelve, but not as many of them reached the skills competition, leading to the collection of only 5 markers, so there wasn't a lot of movement in the standings.

Wes' team led the way in the week with 2 goals in the shootout this week, bringing his overall total up to 3 goals this week.  A 200% gain, which looks great on paper.  Jeremy, Grant, Mike and John P., our mini-game leaders, didn't score goals in the week, but they still lead with 6 goals each.

Benson's team had a monster week in the game-winning goals mini-game, tying a season-high for weekly goals with 5 clutch tallies in the week and his team moved into a tie for 2nd place with 21 game-winners this year.

Stuart's team posted 3 clutch tallies in Week Twelve, which brings his season total to 26 goals and has a 5-tally lead over both Benson and Clayton's team.  Mike's team is also still hanging around with 20 tallies and Tony is at 19, so there is still plenty of movement possible in this game.

There's nothing that reflects the holiday season more than the PIM pool, don't you think?  The goon team of Week Twelve belonged to John P., who finished with 31 minutes in the box.  John's team also leads the pool in penalty minutes in the second segment of the season, already posting 79 minutes in the first three weeks.  This brings his numbers up to 212 minutes, but it's only good for 6th in the overall standings.

Stuart's team still leads the pool in penalty minutes, with 257 minutes and that's to be expected.  Have you seen those Greenley boys over the holidays?  Absolute mayhem.

And then there were three!

Between Devan Dubnyk of the Wild and Carter Hutton of the Sabres, Wes could not seem to catch a break in Week Twelve and he saw his pair of goalies fail to win one game in Week Twelve and that means his team has been eliminated from the game.  On the plus side, it didn't really cost him any money back, but still, it would have been a good title to have.

We haven't seen an elimination since the Week Eight Newsletter, but with a holiday-shortened week ahead of us, there is a chance that Stacey M., Troy and/or Jeremy could also take a fall and the race could be shortened greatly, well before the All-Star break.

We haven't had a look at the plus/minus stats in a little while, so let's have a quick peek at this week.  We've got the time.

We should hear about who the All-Star captains are next week, they didn't post the voting results through the month of December, so it is anyone's guess who the captains of each division for the 3-on-3 tournament, but we'll probably find out when the holiday break is over.  Stay tuned!

For a week that had 55 NHL games on the schedule, it was an exceptionally disappointing week for scoring.  In total, we only managed to collect 631 points, 111 points less than last week, which had four less games in the week.  It looks like a lot of players were already on holiday, as we got closer and closer to the break.

We had a pretty good participation rate for our skaters, 17.62 skater games in each of the 55 games this week, but with all the back-to-back games we saw, the pool goalies didn't get nearly all the minutes, which isn't a big surprise.

Next week, there is only 32 games next week, starting on Thursday.  The NHL will have to pack them all into four nights, so it will be busy and our goalies might have the same kind of participation.

Well, in order to round out this blog post well and so I don't have to do too many posts today, I will include the suspension that Erik Karlsson had earned earlier in the week. It was a 2-game ban for his illegal hit to the head of Kings forward Austin Wagner. Karlsson has already missed Sunday night's game against the Coyotes and will miss Thursday's game against the Ducks for the hit.  The explanation video is down below for you, if you so choose to check it out.

For Clayton's team, Karlsson's lack of dominant offense has been a disappointment so far and tacking on this suspension certainly doesn't curry any favour.  Already having missed one game and missing one more isn't too bad, but it adds to a somewhat disappointing year, so far.

Posted by opiatedsherpa at 11:22 AM