Despite the shortened schedule, the hockey pool had some pretty good performances in the week, as five players were tied at the end of the week with 6 points, so we had to go to the tie-breakers, which as you can see Patrick Kane of the Blackhawks won. First, we eliminated Robin Lehner of the Islanders, he's a goalie and didn't have any goals, then we took out both Nikita Kucherov of the Lightning and Phil Kessel of the Penguins, as they only scored two goals. Then it got tough.  I had to dig deep to break this one and separating Kane and Mathew Barzal of the Islanders was a matter of game-winning goals, 2-1, being the difference, since both players scored 5 goals, had a +3 rating between the two games.

Kane did his damage against the Minnesota Wild on Thursday, scoring his hat-trick there, and then on Saturday against the Colorado Avalanche, 2 goals and an assist.  Definitely a solid couple of outings for the Chicago sniper.

This brings his season total up to 22 goals and 50 points in 40 games this season, good enough for 8th overall in hockey pool scoring.  Stuart took him with the 14th overall pick this year, so he's definitely getting the value for his pick selection.

Grant's week finished early, not having any participation in the only game on Sunday between the Golden Knights and Coyotes, but he had more than enough points to worry about just one game, as he comfortably took the Mover & Shaker for the shortened week with 29 points.  His team was obviously visited by Santa Claus and given all the best stuff, like sick mitts and filthy moves, and they were all eager to show them off to their opponents. 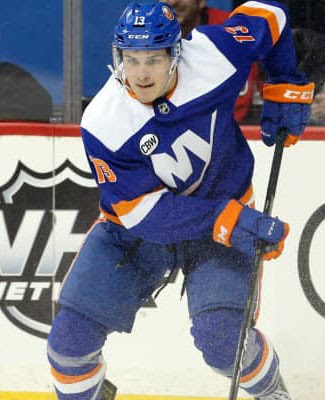 Having two of the five players that were involved in this week's Player of the Week tie-breaker was certainly a huge help to his team.  Mathew Barzal of the Islanders and Nikita Kucherov of the Lightning made some waves with 6 points each to lead the way.

Anton Khudobin of the Stars got a shutout in his only start, collecting 4 points, while Brock Boeser of the Canucks and Tyler Johnson of the Lightning each had 3 points to help out.

In total, Grant's team scored 14 goals in the week, which was 5 goals better than his nearest competitor.  He can thank the 24 skater games he had for all those chances at points this week and even three appearances from his goalies were good enough for 6 points at the end of the week.

This is Grant's fourth Mover & Shaker of the week nod this season and his team has been on a bit of a mission since a bit of a slow start in the first couple of weeks.  This is now his third week in a row, where he has finished in the Newsletter in the money spots, now in 2nd place, tied for 1st with Stuart, but losing the tie-breaker in goals.

Can Grant's team be stopped?

Eric Staal of the Wild, Colin White of the Senators and Jonathan Quick of the Kings all finished with 2 points each for Derek's team in the week, which would have been enough for the Player of the Week, if they were all combined and to think our Mover & Shaker had two of the 6-point players this week.  Eight of Derek's 14 players failed to register points in the week, one due to injury and another is at the World Juniors, so overall, it was a very pedestrian effort here.

This mention in the Newsletter shouldn't be too discouraging for Derek's team, since he opted to leave the overall race and just focus on the rookie points, which hasn't quite worked in his favour just yet and it hasn't helped his side in the overall standings, staying static in 23rd place since the end of Week Ten and ranks last in points in this second segment of the season with 71 points in the last four weeks.

It's back-to-back weeks for a tie at the top of the standings, but the only difference is, the team that is tied with Stuart's, losing out to his in the tie-breakers.

Stuart and our Mover & Shaker, Grant, sit atop the standings at 368 points, while Stacey M. had a horrible week, in the tie-breaker for the Basement Dweller, which dropped her team to 3rd at 357 points to round out the money spots.

Kristy & Don are 5 points back at 352, Troy's team fell off a bit, now down by 9 points, while Mike's team is still a couple arms lengths away at 17 points back of 3rd.

Week Fourteen ramps back up again and we'll have 53 games on the schedule, so a good Mover & Shaker week can really do wonders for the money race, maybe even bring another team into the mix.

There were a few points to be had among our league's freshmen, but the best contributions to the hockey pool teams was only 3 points and our two leading teams in the rookie pool collected those.  Both Clayton and Derek B. saw 3 points in Week Thirteen, extending their lead over everyone else competing for their money back here.  Clayton's team still holds a 20-point lead over Derek's team, 56-36, while John P.'s team, held pointless in the week, is back at 28 points.

Only six games went to extra time in the four days of action in Week Thirteen and none of those six games went to the shootout.  No dirty dangles.  No silky smooth mitts.  No big stops by the tendies.  So, the totals remained the same.  Jeremy, Grant, Mike and John P. all have 6 shootout markers and Brian's team has 5 of his own, all to lead the way in the mini-game here.  It was a bleak week to say the least, but again, a busy week coming up, so we're bound to see some skills competitions before too long.

Out of 32 games this past week, we collected 20 game-winners from the bunch, which has been close to the season average all year, so far.  Five teams each picked up a couple of winners to lead the way in the week, including our mini-game leader, Stuart, who now has 28 this season.  His team is 6 better than both Benson and Clayton's teams and 7 better than Mike and Tony's teams.

There have been a total of 561 game-winners scored in the NHL through 14 weeks and the pool has collected 395 of them for our own personal gains.  That is actually coming in at a rate of 70.4% of the goals actually scored, which is damn good.

19 minutes was tops in the week for the goon teams of the week.  Yes, that's right... teams.  Stuart, Grant and John P., all three are mini-game favourites in this edition of the Newsletter, all finished atop of the goon standings for Week Fourteen.

Stuart's team is still the goon team to beat though, still racking up the PIMs with 276 in total, followed by John P. at 231 and Scott's team at 229.  It's not even a close race and Stuart's team is also leading in points.  Where does his team find the time to score?

The holiday shortened week was what the goalie survival game needed to finish up, as both Stacey M. and Jeremy were unable to see their goalies pick up wins in Week Thirteen, leaving Troy as the last team standing and taking the nod this season.

Marc-Andre Fleury of the Vegas Golden Knights has been nothing but consistent this season and playing a ton too.  Fleury got the qualifying win on Thursday against the Avalanche and then got a second start on Sunday night, which ended up as another win against the Coyotes.

Congrats Troy on the bragging rights for the rest of the season, it's too bad the mini-game wheel wasn't going to reward you for the win though.

Scoring found a decent recovery after that embarrassing display we saw in Week Twelve, almost going back up by a whole point per NHL game this past week.  The pool collected 396 points in 32 games, which comes in at an average of 12.4 points per game, still well back of our season-high of 14.55 in Week Eleven.

Skater games held fairly steady, while goaltending numbers continue to dwindle and we're still four weeks away from even starting to think about drafting again, so the goaltending may still decline in those weeks.  Let's hope that the skaters can keep plugging those backup goalies and keep racking up the points.
Posted by opiatedsherpa at 8:10 AM